What students are talking about today (January 15th) 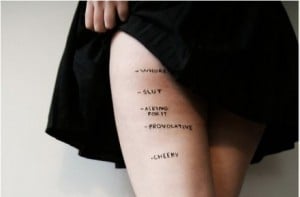 1. An 18-year-old Capilano University student named Rosea Lake (a.k.a. Rosea Posey) has received 275,000 notes on her Tumblr site after posting her feminist artwork “Judgments.” The photo shows a woman with a skirt hiked up and a series of words written on her leg that begin at her ankle with “matronly” and end at her buttocks with “whore.” She told The Province her message is for people to stop judging women unfairly by how they dress, a.k.a.”slut shaming.”

3. Judith Adler, a Memorial University professor, gave her second-year sociology students blank maps and asking them to identify Europe, Asia, South America and Africa. “The results were really mind-opening to me,” she told CBC News. “They should know that they live on the Atlantic Ocean” and “they should be able to know where North America is,” she added. Adler is now advocating for remedial courses. From the sounds of it, these students need a lot more than that.

4. An American study has found that the more money parents provide for higher education, the lower their children’s grades will be. Too bad for you rich kids, right? Not so fast. The study controlled for socioeconomic status. That suggests the relationship has to do with moral hazard; students may take their studies more seriously when they’re spending their own money.  The study is by Laura Hamilton of the University of California at Merced and is published in the American Sociological Review. Hamilton told Inside Higher Education that students who find college is a great experience may stay there even if they’re doing poorly so long as their parents pay.

5. The Idle No More movement has merged with the long bubbling protests against the Northern Gateway pipeline in British Columbia. More than one thousand protesters greeted the federal review panel conducting hearings in Vancouver on Monday, but police kept them outside of the building, reports The Canadian Press. The plan is to ship oil to Asia with a pipeline that crosses from Alberta to B.C. over and near Aboriginal land. Some protesters said they are worried about the risk of an oil spill on B.C.’s coast. The joint review panel is meeting for eight days in Vancouver. The United Association of Plumbers and Pipefitters union offered support for the project on Monday saying it will provide jobs and that “the benefits should far exceed any possible drawbacks.”