U-Pass gets a chance in Ottawa 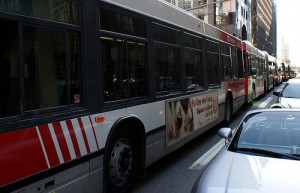 After a lengthy debate over pricing, Ottawa’s city council voted to give the university transit pass pilot project the go-ahead at budget deliberations Thursday night.

The proposed project still has to pass a referendum question in the upcoming student government elections at both Carleton University and the University of Ottawa before the pass will begin next school year.

The pass will cost $145 per term pass and will be folded into mandatory undergraduate annual fees. This price is discounted from the $242 students normally pay for the OC Transpo semester pass.

A referendum question requires 1,000 student signatures before it can appear on a ballot.

If the referendum vote doesn’t pass at either school then the pilot project will be cancelled.

“There are strength in numbers,” Halliwell told the Charlatan. “And students are becoming more of a priority.”

The paper reported that project will cost the city an estimated $3 million taken from the city’s transit reserve fund.