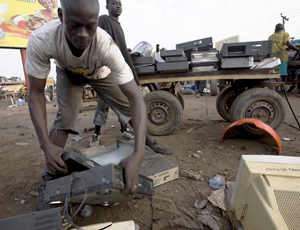 A team of journalism graduate students at the University of British Columbia may have found a computer hard-drive full of sensitive U.S. Homeland Security information in Ghana last semester, but one of those students says he doesn’t want the public to lose sight of the real story: the immoral shipping of discarded or broken electronics from North America to developing countries.

While in Ghana, a country listed by the FBI as one of the top 10 sources of global cybercrime, the students purchased five hard drives in an open-air market, according to journalism grad student Blake Sifton. The group had the drives analyzed, and while the first four were empty, the last one contained confidential information about multi-million-dollar defence contracts between the Pentagon, the U.S. Department of Homeland Security and military contractor Northrop Grumman.

Responding to the students’ investigation, the FBI said it’s concerned companies such as Northrop Grumman (wrongly) think their discarded drives are wiped clean by software before being recycled. The military contractor say it’s looking into how the hardware and data ended up in the country.

But Sifton says he hopes the main point of the documentary isn’t overshadowed by the “sexy” story of misplaced U.S. security data. “The flow of electronic waste from the western world to the developing world is a very, very important story,” he says. Unless consumers are extremely careful of where their electronic waste ends up, “a small child or pregnant woman is going to be burning it to get the metal out of it.”

He says the by-products industry created by the western world’s discarded computers, televisions, cell phones and electronics is surprisingly large, and hurts both the environment and the health of locals in the developing countries where that garbage ends up. “Companies here in Canada will say, ‘Yeah, we’re going to recycle your broken or used electronics locally and safely,’ and then they put it into a shipping container and ship it to Hong Kong.”

The international reporting project was funded by a $1-million donation to the university’s journalism school from Vancouver’s Alison Lawton, a donation made on the condition that students focus on under-reported issues. For professor Klein, having that kind of monetary support was an important piece of why this story is now being told.

“One of the mantras of my class is that we don’t want to be parachute journalists,” he says. “You don’t want to have a preconceived idea about your story, and just find pictures to match.” He says this important piece of reporting is a perfect example of what a young reporter with a video camera and an entrepreneurial sense of purpose can accomplish.

“University is not the real world,” says Klein. “If you are 25, and you just graduated from journalism school, and you’re unencumbered and want to do stories, then you can do it. You can find a really cheap ticket, spend some time on the ground, report on a story and do some really interesting enterprise reporting.”