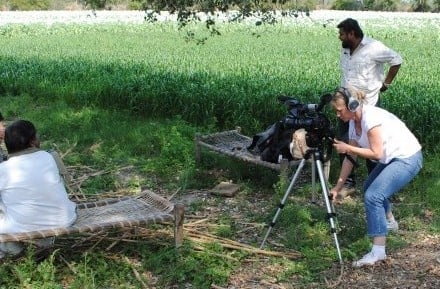 A documentary made by University of British Columbia journalism students aired on Al Jazeera’s People & Power on Wednesday.

Freedom from Pain, which can be streamed here, shows how patients in developing countries suffer without access to legal painkillers, in part because the global war on illegal drugs like heroin has made legal opiates hard to find.

Students from the school’s international reporting class went to India, the Ukraine and Uganda for two weeks each.

In the Ukraine, they met a former KGB officer who was dying of end-stage prostate cancer and who slept with a gun under his pillow in case of unbearable pain. They showed how a young man risks jail to sell him narcotics.

The student reporters even get the executive director of the UN Office of Drug Crimes to admit on camera that his work causes pain and suffering for patients.

Peter Klein, who has worked for NBC’s 60 Minutes, 20/20 and Nightline, oversees the International Reporting course and was recently promoted to Director of the UBC Graduate School of Journalism.