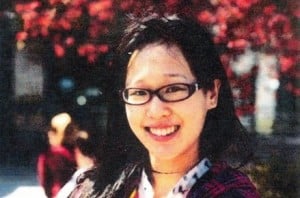 1. Elisa Lam, a University of British Columbia student reported missing Jan. 31st, has been found dead inside a water tank atop a Los Angeles skid row hotel. A hotel worker discovered the body while investigating complaints of low water pressure, reports to The Canadian Press. Guests told reporters gathered outside that they were disgusted by the idea they were possibly drinking water from the tank, reports CBC News. Lam, who was vacationing alone in California, was last seen on Jan. 31st in the hotel elevator. There were reports she was acting strangely.

2. The University of Colorado at Colorado Springs’ list of ways to deter a sexual assault includes the following tips: “Tell your attacker that you have a disease or are menstruating,” and “Vomiting or urinating may also convince the attacker to leave you alone.” The list was widely criticized by conservative and liberals pundits alike (finally—they agree!) on Twitter before the university took it down. The university says the list, which was first published in 2006 and provided to women who took a self-defense class, was taken out of context.

3. While we’re on the topic of sexual assault, a 20-year-old Scottish student living in Thailand accused local police of mistreating her after a rape by saying she was drunk and finding witnesses to testify that they hadn’t heard her screams. A day after the story hit the British papers, however, a 26-year-old Thai man confessed and was “paraded before the press,” reports The Scotsman. The victim says she can’t tell whether that man was her attacker, but police say they will use forensic evidence taking at the hospital to find out. It’s hard to see how she would believe anything the police say now. “The police and authorities are very humiliating, their whole system has let me down—they’re making out that I was some drunken idiot and it was my fault, which was not the case,” she said. Now she accuses them of caring more about protecting tourism than justice.

4. McMaster University students will get an a four-day weekend next fall after its senate approved an additional two-day break on Thurs. Oct. 31 and Fri. Nov. 1, reports CBC. It was one of outgoing McMaster Students Union president Siobhan Stewart’s election promises and she says that it will allow for an “opportunity to focus on wellness.” I’m somewhat skeptical. Won’t a long weekend at Halloween simply devolve into three nights of partying?

5. At Simon Fraser University, students writing in The Peak are debating the chicken wing. There may be more important topics, but it’s still worthwhile test of critical thinking. Here’s a sample of the anti-chicken wing argument: “Napkins turn to useless, shredded pulp in the wake of wet sauce; if you’re lucky enough to get one of the two moist towelettes that may or may not be provided, it’s good for cleaning half a hand, at most. In a situation where you have to use your fingers for anything besides shoveling chicken into your face, you’re screwed.” And from the pro-wing argument: “I love about wings is the competition that often comes with the territory. I find it hard to not accept a challenge, especially when there’s usually a taunt on the sauce list along the lines of: “Think you can survive our deathly spicy, burn-off-your-mouth SUPER HOT DEATH SUICIDE MURDER WINGS?” Uh, yeah. I do, actually. Let me tell you, you will stumble out of that bar feeling like you just dodged death.” Such debating skills are worth that $40,000 student loan, aren’t they?