An environmentalist argues in favour of divestment 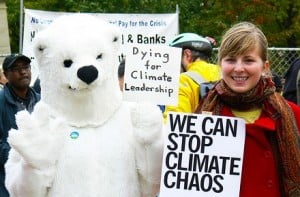 A demonstration in Toronto (Tania Liu/Flickr)

Torrance Coste studied conservation geography at the University of Victoria before becoming a Vancouver Island Campaigner with the Wilderness Committee. He argues that universities should exit investments from companies he considers unethical, like those in fossil fuels. After reading his piece, check out Professor Todd Pettigrew’s argument that divestment is unrealistic.

While the debate around fossil fuel development and climate change intensifies in Canada, there is an effort emerging to hit the perpetrators of this global environmental disaster where it hurts—the bank account. The premise is simple: pressure post-secondary institutions to stop investing—or divest—money from companies in fossil fuel and other environmentally and socially destructive industries.

The call has been sounded through the Go Fossil Free campaign, an initiative of 350.org, a U.S.-based organization that fights climate change. Recently, a group of Canadian university graduates have petitioned Maclean’s to include an “ethical investment” category in its highly regarded annual university rankings.

These efforts have emerged to address a serious conflict of interest. Universities should be striving to find solutions to our most critical problems. For these institutions to invest in industries like fossil fuel development—industries directly linked to some of these problems—is hypocritical and even disingenuous.

My own alma mater, the University of Victoria, has a strong environmental reputation and works hard to maintain that image. “A university of sustainable initiatives” appears near the top of UVic’s homepage, and environmental work done by students and professors is easy to access. UVic’s faculty includes Andrew Weaver, an internationally recognized climate scientist and one of

Most of the faculty and almost all of the students I met at UVic were concerned about climate change, and tried to take measures to limit their personal carbon footprints.

Our efforts would be undermined if it turned out that the university was investing in and profiting from fossil fuel and other destructive industries. (Editor’s note: the University of Victoria was unable to confirm in time for publication whether or not it invests in such industries.)

Most students have no clue where universities are investing their money. This needs to change.
Divestment won’t happen overnight, but at the very least, current investment information should be made public so that prospective students can take it into account when making decisions about where to study.

A large-scale divestment by Canadian universities wouldn’t bankrupt Big Oil (or Big Coal, or the tobacco or arms industries), but it would be a symbolic step in the direction we need to be headed as a country. Divesting from unethical corporations is a way that academia can show real leadership in the shift towards sustainability.

Our universities are exactly the institutions that can and should set the example that we can have a world without fossil fuels, a world that so many young people want. All universities talk the talk. Give us the chance to choose schools that invest responsibly, that walk the walk.

A university like this would be more attractive than one that fills its website with promises of sustainability and its campus with solar panels and bike racks, while investing in bitumen pipelines and open pit mines.

Right now is the perfect time to make this shift. 2012 was a significant protest year in Canada; we saw the emergence of Quebec’s Maple Spring, western Canada’s Defend Our Coast rallies, and the inspiring Idle No More indigenous rights movement. Canada is eager for change and progress, so why can’t our post-secondary institutions be leaders? Our schools could use their considerable power to commit, both academically and financially, to a better future.

Doing this isn’t as bold as it might once have been; it has been proven to work. The strategy is modeled on divestment campaigns that successfully targeted South Africa’s apartheid regime. Anti-apartheid activist Archbishop Desmond Tutu said that the divestment movement helped end apartheid—a feat that seemed impossible for decades.

We need to learn from this example. We absolutely cannot afford to take decades to act on climate change. In Canada, some of us are lucky enough to have access to world-class universities. It’s our responsibility to demand that these universities step up and take action on the biggest challenge we face today.

Maclean’s magazine should include an ethical investment category in their annual rankings, as prospective students and faculty deserve transparency when making decisions around which university to join. Ranking our universities creates competition among them, and a category of this sort would make our schools work to be more sustainable and environmentally responsible institutions.