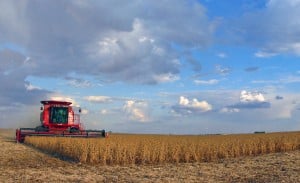 SASKATOON – A new centre is being developed to look at food supply as a growing world population needs to be fed.

The Global Institute for Food Security, based at the University of Saskatchewan in Saskatoon, will look at everything from boosting crop yields to government agricultural policies.

“One of the things that makes this centre unique from other centres is that we will be looking at the entire stream from production to the delivery of food where it is needed, so one way of saying that is, we are looking at the whole process from field to fork,” said university president Ilene Busch-Vishniac.

The institute was launched Monday with $35 million from Saskatoon-based PotashCorp, the world’s largest producer of fertilizer, and $15 million from the province. The funding is for seven years.

PotashCorp president and CEO Bill Doyle said in an interview with The Canadian Press that the idea came about when he joined Saskatchewan Premier Brad Wall and then-University of Saskatchewan president Peter MacKinnon for lunch in May 2011. The conversation turned to food security and the idea for the institute was born, said Doyle.

“It really is exactly what we talked about over lunch that day. It just has a lot more meat on the bones today than it did then,” said Doyle.

Doyle said food security is a challenge. He said there about two million malnourished around the world “so there’s a lot of work to be done” and the pressure on the food supply is great.

He said research at the institute could, for example, find ways for seeds to grow with less water.

“The amount of water that agriculture takes, it’s a huge, huge percentage of the total water consumed in the world. And to be more sparing with water, to have seeds that would sip water rather than gulp water, these are the types of things that we need to develop and explore,” said Doyle.

Doyle, university and provincial officials say Saskatchewan is a good home for the institute because the province has 41 per cent of the arable land in Canada.

The province is also a leading exporter of canola, flax, mustard and lentils.

Saskatchewan Agriculture Minister Lyle Stewart said the province has a responsibility to help feed the world and a population that is expected to reach nine billion by 2050. A United Nations report has said farmers will have to produce 70 per cent more for all those people.

“The demand is very much global and the need for much more food production is global. One of the leading ways that we’re going to have fill that need is through additional research and development,” he said.

Stewart, who has farmed for 39 years, said he has seen the industry transformed by research. He said the University of Saskatchewan is a leader in agriculture biotechnology.

“Another goal of this program, the Global Institute for Food Security, is to make us not only a leader in Canada of ag bio-tech research, but a world leader and I think that’s entirely possible,” said Stewart.