Some top administrators get free homes while others have to pay 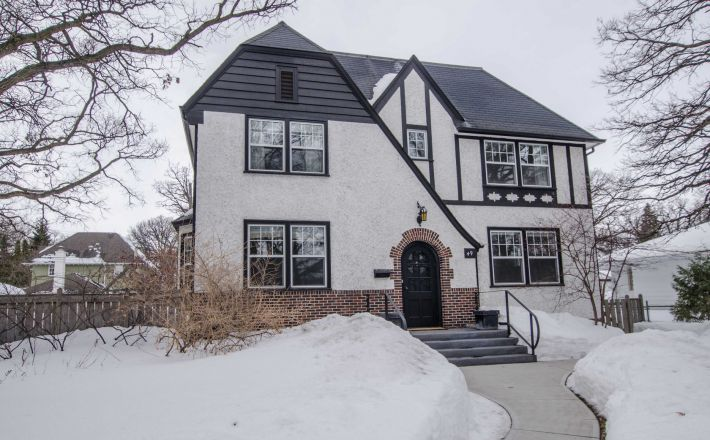 For sale: the University of Winnipeg’s presidential house (Brian Buettner for Chris Pennycook of Royal LePage)

Last year, Lloyd Axworthy, president of the University of Winnipeg, moved out of the faux-Tudor house at 49 Oak. St. where he lived for most of his decade-long tenure. The 3,160 sq. ft. home, purchased by the university in 1955, is listed for sale at $789,900.

Jeremy Read, senior executive officer and adviser to Axworthy, says there are a few reasons for unloading it. “We are among the most poorly funded institutions in Canada,” he says. The property costs about $10,000 per year in taxes plus the cost of cleaning, maintenance and repairs, which is money that could fund bigger priorities. Besides, the university does most of its entertaining on campus these days. And many potential new presidents would prefer to live in houses of their own choosing.

Megan Fultz, president of the University of Winnipeg Students’ Association, who attended Christmas parties at the house, says she was “a little bit torn” about the decision to sell it, because of the historic value. “But I think it’s a wise financial decision,” she adds, “so we can focus on projects that are more student-centred.”

“I think the idea of owning a president’s house is becoming a bit outdated.”

The main argument for free houses is that presidents must host a parade of dignitaries and donors on official university business. The argument against them is that it’s an excessive perquisite for the university’s highest paid person. After surveying schools across Canada, it’s apparent they have mixed views on the value of owning houses.

Cameron Michael Smith sees it as excessive. He wrote in Western University’s Gazette student newspaper last week how he was surprised to learn that, while he struggles to pay $500 monthly for rent and teaching assistants say they’re forced to use food banks, president Amit Chakma—who earned a base salary of $479,600 in 2013, the highest for a president in Ontario—lives for free in a mansion called Gibbons Lodge.

Western says Chakma hosts 100 receptions per year there on behalf of the university.

The University of Windsor also sees value in owning a house. It provides president Alan Wildeman with a 2,000 sq. ft. four-bedroom home valued at $450,000 along with eight hours of housekeeping weekly, internet, phone service and a vehicle “produced by Chrysler, Ford or General Motors.” That’s on top of a base salary of $317,000.

The University of Toronto has a mansion for its president, Meric Gertler. It’s a 9,960 sq. ft. six-bedroom in the Rosedale neighborhood that was assessed at nearly $14.5 million in 2012. The home hosts thousands of visitors per year including benefactors.

Brock University offers president Jack Lightstone not a house but a housing allowance: $15,000 per year on top of a base salary of $333,576.

McGill University principal Suzanne Fortier gets neither, though her contract does promise reimbursement for, “reasonable expenses incurred in the use of [her] personal residence for University-related functions, receptions, dinners or other forms of entertainment.” Fortier, who earns a base salary of $390,000, was recently praised by McGill’s student president for voluntarily disclosing her hospitality expenses.

Indira Samarasekera, the University of Alberta’s president, was scrutinized after the school purchased a house she already lived in for $930,000 in 2009. Brian Heidecker, then chairman of U of A’s board, told the Edmonton Journal at the time that the house would make recruiting “infinitely easier.”

The University of Victoria and St. Francis Xavier University, on the other hand, report that their presidents are provided neither houses nor housing allowances. And neither is paid significantly more than the average of their presidential peers. Jamie Cassels, Victoria’s president, will earn a base salary of $350,000 this year while Sean Riley, outgoing St. Francis Xavier president, made $264,553 in the year ended March 2013.