University? There’s an app for that 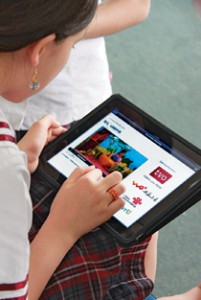 To hear Dean Pacey describe online learning is a lesson in how the Internet—despite its vastness—can actually be a very personal place. In fact, taking courses over a computer, he believes, has the potential to make education more intimate and effective than any typical class-teacher setting, which is often full of distractions.

“When I go to university and I sign up for psych 100, I’m sitting with 1,500 other students with one talking head who I can’t hear and who may or may not speak English well at the front of the room,” he says. “How is that a rich experience?”

By comparison, Pacey imagines a world in which students in any country can pick and choose the courses they’d like to take over the Internet from the best international schools, many of which are in Canada. These courses would feature video lectures, online chats and news feeds related to the content, and would be delivered in whatever language the student preferred. Even more surprising: while the course content could be viewed on a computer screen or tablet, it would be designed, first and foremost, for smartphones—making the “classroom” entirely mobile and available anytime, anywhere.

Pacey is chief operating officer at ClevrU, a Waterloo, Ont.-based tech firm, which is set to offer this innovative virtual education as soon as this summer. And the target audience is just as compelling: developing countries, where there are millions of individuals who want an education but can’t afford it or access it locally—and where smartphones are common.

“Most people don’t have a desktop computer. Many don’t have a notebook. They may not have a house. But the one thing they will have is a feature phone that connects to the Internet,” says co-founder and CEO Dana Fox. “If you need an education, and you have a mobile device, you can now have what we have in Canada.”

Among the first investors in ClevrU, which was incorporated in 2010, was retired NHL superstar Eric Lindros. He learned about the company through a mutual contact and was intrigued. “Education gives people a chance to do whatever they want in the world. Without it, your options are numbered,” says Lindros, who works as a consultant. “Having a platform that allows people to educate themselves, no matter where they are, excited me.”

The first users will be in China, where demand for North American education is high—850,000 students come here annually to learn. Thousands more would too if they could pay for it, says executive vice-president David Murdoch, and if schools had room for them. Earlier this year, ClevrU partnered with two mobile carriers, China Unicom and China Telecom, which together represent over a quarter of a billion people. While the fees for courses and the credit-granting process are still being determined, many are buying in already. “The carriers have said to us, ‘We have nothing like this. You are the first to come along with e-teaching,’ ” says Fox. “China has gone through rapid development over the last 15 years. They want to integrate with the world economy. They’re reaching out to North America for those skills.”

To meet this growing demand, ClevrU has partnered with post-secondary schools and educational organizations, including Conestoga College in Kitchener, Ont., Wilfrid Laurier University in Waterloo, Georgian College in Barrie, Ont., and even Toronto-based TVO, which will design and supply their own content that users can download from the ClevrU website. They’re banking on ClevrU’s appeal in emerging markets to elevate their global brand and provide additional, novel income.

“ClevrU allows us to test the sale of our content in a completely new international market,” says Lisa DeWilde, CEO of TVO, which plans to offer 45 videos aimed at teaching English. Adds John Tibbits, president of Conestoga, which is developing plumbing courses for ClevrU, “We believe the content we will provide will be revenue-generating and will improve our reputation and create jobs.”

There are, of course, plenty of challenges ahead, including recruiting more content providers. And while competitors are scarce, the company must avoid the pitfalls that have ruined many Canadian tech giants. Pacey, who previously led Research in Motion’s foray into the U.S. and Europe, says that ClevrU can’t rely on one way of doing business. “We have to look very hard at how technology changes because it happens very quickly. If you get static, the risk is you become complacent, and someone replaces you.” The company will apply that philosophy as it moves into India and Latin America next.

For Tushar Singh, the 32-year-old co-founder of ClevrU and chief technology officer, the potential impact of providing education to those who are too poor or isolated to get one locally is what’s driving the company forward. “Education is a lifeline. It doesn’t just change a person, it also changes a community.”