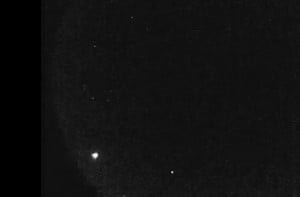 Photo courtesy of the University of Western Ontario

Astronomers from the University of Western Ontario released a rare video Wednesday of a meteor falling from the sky just east of Toronto.

The footage was captured just after 6 p.m. on Monday evening by six video surveillance cameras belonging to Western’s Southern Ontario Meteor Network. The basketball-sized meteor was first spotted over Lake Erie and moved toward the north-northeast ending just south of the town of Selwyn, Ont., according to a news released from the university. Researchers say it likely sprinkled small meteorites over the area east of Selwyn near the eastern side of Upper Stony Lake.

Peter Brown, the director of Western’s Centre for Planetary and Space Exploration, says the occurrence is rare—only about a dozen meteorite falls have had their orbits measured by cameras. That’s why researchers at Western and the Royal Ontario Museum are interested in hearing from anyone who may witnessed or recorded the event or has found fallen meteorite fragments.

“Finding a meteorite from a fireball captured by video is equivalent to a planetary sample return mission,” Brown said in the news release. “We know where the object comes from in our solar system and can study it in the lab.”

Did you see the meteor? Contact Kimberly Tait at ktait@rom.on.ca