What students are talking about today (February 14th) 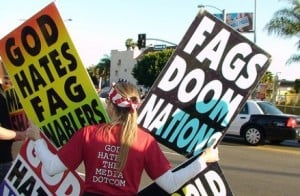 1. A theatre class at Memorial University recently put on a production called the Laramie Project that told the story of a Matthew Shepard, a 21-year-old man who was beaten to death in 1998 because he was gay. Westboro Baptist Church, a group of Christian fundamentalists, disgusted many when they picketed Shepard’s funeral with signs claiming “God hates fags.” They’re still at it. A representative of the church Tweeted to MUN calling them “a bunch of fag enablers” and that they will “burn in Hell for all of eternity.” Meanwhile, plans by WBC to picket the U.S. college Vassar—which Westboro calls an “Ivy League Whorehouse wholly given over to the fag agenda,”—have led to something positive. Jon Chenette, acting president at Vassar, reached out to students to find a positive way to counter the planned hate speech. They started a fund-raiser for the Trevor Project, which provides counseling for young gay people who may be facing crises or thinking of suicide. Inside Higher Education reports that contributions have already topped $47,000.

2. University of Guelph officials are unsure whether students’ personal data have fallen into the wrong hands after 15 computers and two external hard drives were stolen, reports CTV News. Reminiscent of last year’s Canada Student Loans breach, the drives may have contained contained names, addresses, contact information and social insurance numbers of both students and applicants. The computers were behind a locked door that was pried open.

3. One international student at the University of Saskatchewan is speaking out about his experience with bed bugs. His residence room was treated twice for them. He then moved to a new building on campus and ended up with an infestation there too that required treatment four times, including over his exam period. He told The Sheaf he was getting rashes and infections due to the bugs and had to start taking sleeping pills to make it through the night. Bed bugs are half-centimetre-long beasts that feed humans while they sleep. They’re expert hiders. Their bites are itchy like mosquito bites and they may leave dark streaks on mattresses. In other words, they’re gross.

4. Remember when Western’s University Students’ Council tried to move The Gazette student newspaper to a smaller office? Well, after a huge uproar over press freedom, the executive approved a plan that will see the paper remain in its current digs. Tony Ayala, vice-president finance for the USC, told The Gazette that they decided this after hearing from all stakeholders.

5. If you’re bitter and dateless this Valentine’s Day, you’ll appreciate this collection of Rejected Candy Hearts from the late shift at Maclean’s.ca My favourite: You’re 6/10 at best.