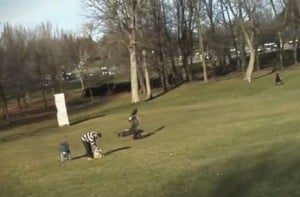 The viral video of the eagle, which was created by students at Montreal’s Centre NAD, has received international media attention and had more than 41 million views on YouTube since it was posted on Dec. 18.

And the school says it’s also generated a few bucks that will go toward a scholarship for a deserving student at the 3D animation and digital design school.

School spokeswoman Claude Arsenault says the amount of the scholarship hasn’t been determined because the cheque hasn’t yet arrived from Google, YouTube’s owner.

The school and the students who made the video can’t profit from it because it was made with software bought under an educational licence.

That means the software is sold at a reasonable cost to schools as long as it is used for educational, not commercial, purposes.

Making money with the video, created as part of a class project, wasn’t the goal, Arsenault stressed.

She said the AdSense account with the social network video site wasn’t even created until some time after it had been initially posted as the school ensured it could do it in accordance with its licences.

Putting the money to a good cause is fine with the video’s creators, who were rewarded with a grade of A plus for their work.

“Knowing that we helped get the school on the map — it’s a good feeling, ” said Normand Archambault, one of the students who put together the minute-long video which purported to show an eagle swooping down and grabbing a toddler in its talons at a Montreal park.

Many people treated the hoax as the real deal.

It had only been on YouTube for 30 minutes before it got its first Reddit comment and then the Twittersphere lit up. Posts on Buzzfeed and Slate appeared and within three hours of it being posted, mainstream media in Quebec, Australia and the United Kingdom picked it up.

As people began realizing the video was a hoax and views climbed into the millions, the students were bombarded with interview requests from media in Canada, Thailand, the United States, Japan, Chile, the United Kingdom, Australia, France, Belgium, Germany, Russia and Mexico.

The school says the clip has become the most watched YouTube video produced in Quebec.

Andrew Swartz, a spokesman for Google Canada, said people seeking to make money on their videos can do well in the YouTube partner programs such as AdSense as they sign up to allow static ads, banner advertising and pop-ups on their page.

He said Google does not divulge revenues on partner videos. The program works on a revenue-sharing basis where a portion goes to Google and a portion to the creators. Advertisers pay based on the number of views the page gets.

“Obviously the more views you have that have ads against them, the more revenues you’re going to make,” Swartz said.

“Our partner revenue has doubled for the fourth consecutive year,” he said in a telephone interview from Toronto. “Thousands of channels on YouTube are now making six figures annually.”

He noted that the Korean pop anthem “Gangnam Style,” was first posted in July 2012 and recorded one billion hits by the end of the year, making it the most watched YouTube video ever.

The eagle snagged 30 million of its views within four days. It has since levelled off.

“Forty-one million is certainly quite a lot of eyeballs on that video,” Swartz said. “That is pretty impressive.”

Archambault says the students have also recieved a few job offers from small software companies but are currently concentrating on their end-of-program projects.

“Our teams are making more of an artistic project than a realistic video like the eagle,” Archambault said.

Added Arsenault: “It definitely won’t be a hoax.”