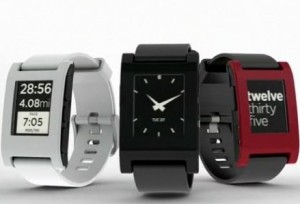 When most students graduate, they desperately search for jobs so that they can start paying off their giant student loans.

That won’t be necessary for Eric Migicovsky, a 2008 University of Waterloo systems design engineering graduate and entrepreneur, who has raised more than $4.4 million for his “smartwatch.”

The idea behind the Pebble is simple: it alerts users when a new call, email or message is coming through on their iPhone or Android phones and displays it on the electronic paper screen. It’s especially useful if you don’t have easy access to your phone, which means the Pebble is the perfect solution for cyclists, joggers, or lazy people who want to stay connected while only having to move their wrist.

The Pebble is a new-and-improved version of the inPulse smartwatch that Migicovsky developed while he was still a student at Waterloo four years ago. It was based on a similar idea, but instead of hooking up with Android and iPhone it connected wirelessly with BlackBerry smartphones.

The initial plan was to raise a more modest $100,000 in a five week period on Kickstarter, the online funding platform. Less than 28 hours later, $1 million had been raised. Within a week it grew to over $4 million. It’s only the fifth Kickstarter project to crack the million-dollar mark and has set an all-time record for the site. That’s not bad for a project that still has 30 days of fundraising to go.

Although the Kickstarter campaign doesn’t end until May 18, Migicovsky has already started buying components and is talking to customers about what sort of applications and features to include. You can pre-order a Pebble on Kickstarter for $115 in jet black, or $125 for other colours. The main competitor for the new device will be the Sony Smartwatch, which sells for $149.99.

Best of all, “Pebble Technology” will return to UW to and hire co-op students. It’s full circle: student works on a cool project, becomes a millionaire, and then hires students.

Although seemingly an overnight success, with coverage from the BBC to Wired, Migicovsky’s Pebble smartwatch is obviously the result of years of hard work. So while you’re spending your free time this summer drinking with friends or playing Skyrim, remember that there’s probably someone in systems design engineering working towards becoming a millionaire.