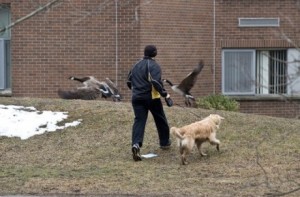 It’s Canada Goose nesting season at the University of Waterloo and that means students and staff are tiptoeing across campus avoiding sharp black beaks and mucky grey puddles.

“You don’t need to antagonize or even get near the nest for the alpha male to get aggressive,” says geography and environmental management student Alex Harris, who spent the past year studying the five-to-seven kilogram beasts.

Those alpha males and their pregnant partners take up residence in dozens of places at the sprawling Ontario campus every year where grassy lawns provide food, buildings offer shelter and there are few coyotes, foxes or wolves to keep them in check.

But they won’t be back next year if Harris has his way. He’s introduced a new predator. Molson, part Border Collie and part Golden Retriever, is a natural animal herder who happened to need “a way to burn off his energy and some work to do,” says Harris, who adopted him. In recent weeks the pair have twice daily chased the avian squatters off a large swath of campus. Harris, meanwhile, has recorded various observations and GPS coordinates for his undergraduate thesis.

Molson, it turns out, was just one of several innovative reactions Waterloo students and staff had in the past year to their sometimes mean and messy unofficial mascots. For example, the Student Success Office created #GooseWatch, allowing anyone to Tweet nest locations for a crowd-sourced map. The data was then turned into an application showing the best routes to steer clear.

Harris has been thinking of goose management since his first year on campus when he witnessed a confrontation between a friend and an angry bird. Later he worked with university groundskeepers and learned about their egg oiling program. They coat the eggs with mineral oil to prevent them from hatching. Although they leave a couple of the five to 10 eggs in each nest untouched, Harris sees the practice as somewhat unethical.

One day while walking a friend’s Golden Retriever, he noticed the dog had no trouble scaring away geese, and so he thought about the possibility of using a fake predator. His research turned up cases where Border Collies had been used to spook birds and so he got to work. The thesis isn’t done, but he says the experiment was a success. He believes the key is to scare the birds away before they nest. The dog technique is an innovation he thinks might spread to golf courses, parks and other lawns.

And it’s not just technological and environmental innovations that have resulted from the geese. Social innovations have sprung up too.

Last April, campus bookstore employee and social development studies graduate Elaine Sanders was just finishing her degree when she noticed a graphic of an aggressive goose and the words ‘I survived nesting season’ spreading across Facebook walls. She tracked down the creator who shared the design. A year later, more than 1,000 t-shirts and mugs with the image have been sold.

Since then, two more t-shirts and stuffed geese have gone on sale. At $5.50 apiece, the t-shirts aren’t a profit-making project. They’re community building, says Sanders. “We had a low price for them because we wanted everyone on campus to have access,” she adds. “Whether people love, hate or are afraid of the geese, everyone can relate to the phrase, ‘I survived nesting season.'”

Kirsty Budd, a community manager in the Student Success Office, helped create the map. She saw it as a way to bring the campus together and a fun break from exams. “The geese really are part of our community,” she says. “We love them. I think people would miss them if they were gone.”

That may be true, but if Molson and Harris get their way, there will be less honking on campus.