"Peeping toms" reported on campuses from coast to coast 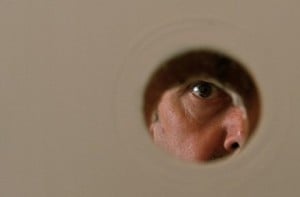 Police in Waterloo, Ont. arrested a 31-year-old non-student on Thursday and charged him with voyeurism after he was, “observed using a cell phone to take video of unsuspecting females as they used a staircase on the campus.”

It wasn’t an isolated incident at Waterloo, nor are “peeping toms” rare on Canadian campuses. During the last school year there were at least half-a-dozen media reports of men filming, photographing or otherwise spying on female students from New Brunswick to British Columbia.

At the University of Guelph, Doug Dennis, a 38-year-old former staff member, was charged with eight counts of voyeurism for allegedly taking photos up women’s skirts. He’s in court this month.

Paul Carkner, then 27, was working as a University of Waterloo co-op coordinator when he filmed women with an iPhone as they passed over a staircase.* He pleaded guilty and was sentenced to 100 hours of community service and 15 months probation.

In January, Scott Raymond Gagne, 28, pleaded guilty and got 18 months of probation after serving 81 days in custody for filming a woman using a bathroom at the University of Alberta Hospital.

That’s not all. Last fall, a student at the University of British Columbia twice saw a voyeur in the women’s locker room at the campuses’ Osborne Centre gym. Jay Winship Forster’s BlackBerry contained at least half-a-dozen locker room videos when he was caught. He pleaded guilty.

Also last fall, London Police charged Bradley Priestap, then 47, with 17 counts, including breaking and entering to commit voyeurism and voyeurism, for alleged crimes near Western University.

In other words, women need to be aware of voyeurism no matter what university they attend.

*This post has been corrected. It referenced 30 videos when in fact only one charge was upheld.