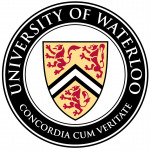 A friend who attends the University of Waterloo mentioned to me today that students in the ‘loo are raging against the university’s new proposed logos.

The logos were leaked July 13 by a co-op student working at the school, according to an article in the Imprint, Waterloo’s student newspaper.

As part of a rebranding effort, the new designs include a new marketing logo — a bold black ‘W’ emblazoned with crisscrossing, coloured lines — and a new seal — an update of the old Waterloo school crest to be used for diplomas and official documents.

A Facebook group created by Waterloo students against the new logos has amassed over 8,000 supporters and caught the attention of local news reporters.

Student criticism didn’t stop there, however.

In an extremely co-ordinated effort, external websites and petitions have been created to protest the new rebranding.

Students on the Facebook group have expressed sentiments that the marketing logo is “ghastly” and “unprofessional.”

The university has said however, that the new logo was meant to be unconventional.

The new ‘W’ design, the bulletin says, is designed to represent those attributes.

Students most critically and comically have compared the coloured lines in the logo design to laser beams, however, Beckel explained in the bulletin that they are meant to represent the school’s different faculties.

Less criticism has been raised about the updated crest logo, which, despite a few tweaks and additions, stays true to the historical crest the university has been solely using for decades.

While it seems the school has put a lot of work into the complicated process of rebranding, students seem to be extremely disappointed with the outcome.

What do you think about the University of Waterloo’s redesign? Leave your reactions, thoughts and insights below.