What students are talking about today (March 13th) 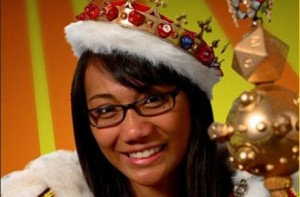 1. First-year University of Waterloo student Celeste Anderson has won $100,000 and the title King of the Nerds on the eponymous American reality TV contest show. Contestants competed in events like Segway races, debates and Cosplay (costume play), according to Metro News. Before the show, Anderson traveled across North America competing in video game tournaments where she excelled at Halo. She’s considering a career in video game design. The show’s finale is tonight on Slice. Totally missed this sleeper hit? Don’t worry, it has been renewed for a second season.

2. Even supposedly conservative Alberta has spent so much that they are now forced to make drastic cuts to post-secondary education. An editorial writer for The Gateway student newspaper isn’t pleased, in part because programs at some schools could be eliminated if others offer them nearby. “The new plan for Alberta education doesn’t see the point in the same programs being offered between two nearby schools,” writes Andrew Jeffrey. “But this policy hurts post-secondary accessibility as fewer students will be able to qualify for these programs… with tougher competition.” Alberta has traditionally provided more funding than other provinces, which are now cutting too.

3. Nova Scotia’s New Democrat government, which has overspent much like their Albertan peers, is facing a backlash from students at NSCAD University, which has been asked to come up with a new financial plan. They showed their frustration over austerity on Tuesday by tying red ribbons to the legislature, reports The Chronicle Herald. The strips of cloth apparently represented “a connection between the university’s debt and the province,” but students of the fine arts and design school don’t appear to be understanding that connection. NSCAD has built up an enormous debt, but so far staff and students have been opposed amalgamation, one of the main ideas to save money.

4. Canada’s first Bachelor of Arts in Sport Media could start at Ryerson’s Schools of Journalism and Radio and Television Arts this fall after gaining senate approval, reports The Eyeopener. The program would be a combination of journalism and business courses. Ryerson already attracts a number of wannabe sports journalists and offers a sports reporting course every two years.

5. Some students at Ryerson University are wondering why they can’t vote online in student elections. After all, the Ryerson Students’ Union president was chosen with less than eight per cent of the vote and schools with online voting have seen more than 40 per cent turnout in some cases. One reason the RSU says it’s is opposed is that security may be breached, as it was elsewhere.