We want more international students, so why deport them?

Nigerian students shouldn't be sent back 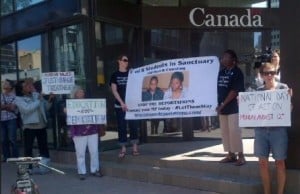 Victoria Ordu and Ihouma Amadi, two students from Nigeria, have been seeking sanctuary in Regina churches since June 19th, 2012 to avoid deportation for violating their student visas.

Their situation shows how the federal government sees international students in Canada: as injections of money into the economy rather than as human beings worthy of respect.

The two came to study at the University of Regina in 2009 on full scholarships paid for by Nigeria. Ordu, a theatre arts major, and Amadi, an international studies major, were working legally on campus part-time until their problems began in 2011, when they took part-time work at Wal-Mart—Ordu with an agency doing demonstrations in the store, Amadi with the store itself. They were unaware their social insurance numbers allowed them to work only on campus. After two weeks at Wal-Mart, Ordu learned she was not allowed to work off campus and quit. Amadi says she found out when she was led out of the store in handcuffs.

To be clear, no one contests that Amadi and Ordu broke the law. They violated their visas by taking work off campus. But it appears to have been a genuine mistake: as soon as Ordu learned she was not allowed to work off campus, she quit. Punishing their minor and seemingly unintentional infractions with deportation is a ludicrous overreaction akin to the overzealous prosecution of music piracy in the U.S. where a woman has been ordered to pay $222,000 for 24 illegal song downloads.

Since the two were arrested, despite the Saskatchewan government’s and U of R community’s support, the federal government has refused to allow them to finish their degrees. If deported, they will be barred from reentering the country for at least a year and face losing scholarships.

International students make up an increasing portion of the Canadian post-secondary student population and they are charged exorbitant tuition to do so. A recent study by HSBC found that they pay an average of $18,474 per year in tuition; average tuition for Canadians is $5,500.

At the same time as they are being aggressively courted by provincial governments and asked to pay through the nose for the honour of studying here, foreign students may see Ordu and Amadi’s treatment as evidence that even a minor infraction in Canada can have dire consequences.

The federal government is not in charge of universities (education is provincial) and so they may be less concerned with ensuring that foreign students find Canada desirable. Still, they are definitely interested in having immigrants with desirable skills coming and contributing to the economy. If Canada gains a reputation as a place that deports foreigners for wanting to work while enrolled in school, why would anyone with other options come here? And it’s the people with other options—people with in-demand talents and skills—that the federal government wants choosing Canada.

Citizenship and Immigration Canada, a federal department, seems to realize that and proposed changes in December that would allow students to get one permit to work on- and off-campus. If it passes, future students will have fewer hoops to jump through in order to work while studying.

But the change will have no impact on these women’s case and the federal government seems unwilling to rethink its decision. This is despite the fact that they have already had graduation delayed by one year and have spent more than 400 days effectively cut off from the world.

International students are a hot commodity in Western countries looking to inject cash into post-secondary institutions. The federal government needs to treat them with respect if they want to compete with other countries. They can start by rescinding the order to deport Amadi and Ordu.

Tannara Yelland is a recent history graduate of the University of Saskatchewan.