We'll bring peace to the Middle East (but first, York U.)

How UofMosaic is tackling tensions on campus 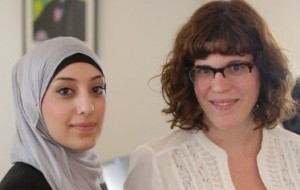 One was of a gaunt and lifeless body beneath a barbed-wire fence with an Arab keffiyeh around his neck and wearing a striped uniform. The juxtaposition of the keffiyeh and the stripes ignited a war of words between Muslim L4P members and Jewish students from Hillel Waterloo. It was the type of uniform that Jews were forced to wear during the Holocaust, says Hillel Waterloo director Jessica Kronis. The poster implied that the occupation of Gaza is comparable to the genocide that killed six-million Jews. Kronis says it made Jewish students feel unsafe.

A campus constable deemed the posters “hateful” and ordered them removed. Laurier 4 Palestine (L4P) obliged, but Hillel soon discovered more drawings—one with Israeli soldiers aiming pistols at defenceless women in head scarves, others with coffins labelled “Made in Israhell Inc.” L4P refused to take them down, so the constable did so himself. When asked by The Cord student newspaper to reflect on the incident, L4P co-president Isra Al-Thibeh lamented that their goal was dialogue: if only the Jewish students had been willing to talk. Hillel’s president Rachel Malin came back with, “If hate wasn’t their main theme… then more Jewish and non-Jewish students would be interested in engaging in a dialogue.”

It was the type of conflict that plays out on Canadian campuses every year. One side protests and the other responds. Feelings are hurt. Then each side tells the campus newspaper that they’re willing to talk to the other—but won’t until the other side stops hating. In the end, little changes.

If only these students had gone to school at the University of Toronto, Ryerson, or York University. They could have actually talked. That’s because a network of campus clubs called UofMosaic has been facilitating round-table discussions between such religious and ethnic opponents at all three of Toronto’s big universities this past year. The evidence so far suggests progress, however slow, toward more respectful campuses.

Instead of tacking up factious posters, inviting one-sided speakers and hoisting megaphones, dozens of Muslims, Jews, Christians and Hindus have been sitting down at each campus every couple of months since September and listening to short presentations by Middle East experts, before calm discussions facilitated by moderators from all sides.

Their meetings culminated in the March 16 Citizen Summit at Ryerson University, where they heard from judicious experts like former Middle East ambassador Michael Bell, who talked about what the Arab Spring might mean for the Israel-Palestine conflict, Iran’s nuclear program, and more.

The summit ended with an agreement by all parties to jointly raise $10,000 for Syrian refugees. It’s not exactly a peace accord, but their decision to work together represents incremental change. UofMosaic is hoping for more outcomes like that as it grows its network of “peace-building clubs,” which may soon include chapters in British Columbia and Quebec.

UofMosaic is a project of the Toronto-based Mosaic Institute, a charity founded on the belief that Canadian values like democracy, dialogue and respect for minority rights can facilitate peace. It works like this. Campus leaders are recruited by coordinator Lorenzo Vargas, a Colombian-Canadian and recent York graduate. They get to know each other informally, over coffee. After that, they recruit like-minded students to their quarterly meetings through displays, posters and emails, all of which make clear their cardinal rule: dialogue will be respectful.

Then, in York’s case, they hired security guards and held their first meeting. At York, the need for hired help won’t shock most Torontonians. Simmering distrust between Arab and Jewish students has exploded on the suburban campus more than once. One of the bigger conflagrations occurred in 2009 after a group headed by Jewish students collected 5,000 signatures to try to impeach the executive of the York Federation of Students (YFS) and its Afghan-born president, in part because of their support for Israeli Apartheid Week. When the group held their press conference in a tiny room on campus, they were swarmed by dozens of protesters supporting YFS and fled to the Hillel office upstairs. The police were called in to escort them away safely.

But security is not needed anymore. Maxa Sawyer, a 26-year-old master of education candidate who first studied there as a bachelor’s student from 2005 to 2008, says things are less tense now: “The politics have changed. The mentalities have changed. It’s a lot more relaxed today than when I was an undergrad.”

Sawyer, a Jewish student from Winnipeg, partnered last summer with Sara Zeitoun, a Jordan-born Arab Muslim and member of the Middle Eastern Student Association (MESA), to lead the two-year-old UofMosaic club that Vargas started at York. Up to 30 people attended their meetings, including Hillel members, Zeitoun’s peers from MESA, and a number of political science students, some of whom had no Jewish or Muslim relatives, but who had an interest in respectful dialogue.

Zeitoun was surprised about the tenor of the meetings. “People were calm—very calm,” she says. “Many of them came just to listen, rather than speak.” Then again, she adds, “there was no initiative on campus that had allowed that before,” For some, she says, it was their first chance to listen.

Sawyer says the experience was eye-opening. One session included Iraqi-born York professor Thabit Abdullah, who gave a brief lecture on the history of Arab societies. When someone asked how he perceived Israel as a person growing up in Iraq, Sawyer was surprised by his candour.

Abdullah says he was simply giving the facts. “The textbooks in Iraq tell us the story that the whole creation of the state of Israel was a colonial imperial project,” he says, adding, “I wanted to make very clear that this is what’s in the Arab students’ minds.” When he did offer his opinion, Abdullah says, it was only to argue that the main obstacle to peace is that each side tends to dehumanize the other. “If an Israeli comes to the table with the assumption that the main reason for the Arab-Israeli conflict is backward traditions of the Arabs… or if Arabs see Jews as inherently evil,” he says, “that makes peace impossible.”

The Arab-Israeli conflict isn’t the only issue that UofMosaic chapters might choose to tackle. Past projects of the Mosaic Institute itself have included the Young Canadians’ Peace Dialogue on Sri Lanka. Tamil, Sinhalese and Muslim youth met to talk about the civil war that divided Sri Lanka. After the dialogues, held at the University of Toronto, students from each ethnic group collectively formed the charity Build Change, which is now funding wells for people affected by war in Sri Lanka.

Sawyer and Zeitoun are hoping to keep their dialogue going after their term as co-leaders of UofMosaic wraps up. That’s not to say they’ve changed their minds about the conflict. “There was no huge transformation,” says Zeitoun, “but there were some small changes. I got to work with some Jewish Israelis, to know some Jewish Israelis,” and, she adds, “when you get to know someone as a person, it becomes less political.”