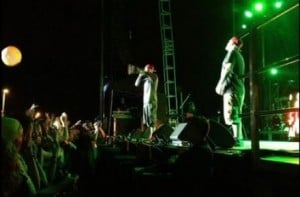 Canadian rapper Classified—hired as a safe-choice replacement for American rapper Sean Kingston, who was facing a charge of rape until last week—joked about rape during his performance on Saturday night at Western University, according to some on Twitter. This prompted apologies from the student’s council and the school but not the performer, who Tweeted that he didn’t endorse rape. What’s clear is that he endorsed other bad behaviours like drinking.

Here’s one of the critical Tweets:

Essentially classified just told my frosh to get hammered, smoke weed all night, drop out of school and commit rape. Like get off the stage.

The USC apologized swiftly. President Patrick Whelan said he did not hear the rape comment.

The comments expressed on stage tonight do not reflect that of the orientation program at western, sexual assault is never a joke.

“The University Students’ Council (USC) and Western regret the actions of and commentary made by the artist Classified Saturday night on stage at the Orientation Week concert. Both groups felt the performance did not reflect the mission, values and messages of the Orientation Program.”

The rapper admitted to the jokes about substance use but not about sexual assault.

But yes I did rap about weed. Liquor and partying. I won’t apologize for that.

Many Tweeted in defence of the rapper and said his words were taken out of context.

This follows two other controversies where sexual assault was joked about during 2013 orientation week events. Last week a video went viral showing orientation leaders at Saint Mary’s University in Halifax shouting a cheer that included the words, “N… is for no consent.” It was quickly condemned and the student president resigned.

Meanwhile, commerce students at the University of British Columbia are being investigated over a rape-promoting chant, for which the Commerce Undergraduate Society has apologized.