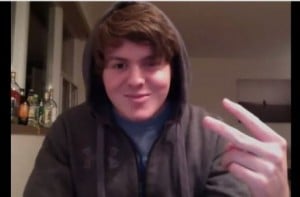 Keith Horwood, a Western University alumnus, admitted to being behind the hacking of the student union’s elections website earlier this week.

Horwood will be charged criminally, a campus police official told the Western Gazette.

Police said they had suspected Horwood before he released this video apology on YouTube.

“It was never my intention to harm or hurt anyone,” Horwood says in the 10-minute clip.

Horwood explains that he stumbled upon a security flaw that he’d never seen in real life. “My brain just exploded,” he says while wearing a hoodie, empty liquor bottles in the background.

“It was like somebody had just put the world’s coolest toy or the world’s most attractive woman in front of me and they were like… stay away,” he says, “and you know what? I couldn’t.”

Horwood goes on to say that after the immediate “high” and “rush,” he started seeing complaints on Twitter. That’s when he first considered the negative consequences for student politicians, he says.

Horwood says he originally thought “it would just blow over,” and that he was doing Western Information Technology Services a favour by pointing out the security flaw.

The University Students’ Council doesn’t see it that way. The hack cost students thousands of dollars and 10,000 votes have been tossed. Voting is rescheduled for Feb. 29 to March 1.