Words of wisdom for Generation Me 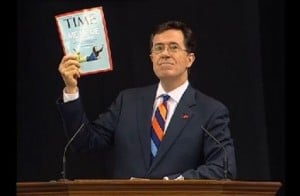 It’s commencement season. For many Canadian students and their families, that means sitting in stuffy rooms listening long-winded speeches from important people of whose stature they have only just learned from the program in front of them.

There was a common theme among these celebrities addresses. Each talked of how the much-maligned Millennial generation can use their educations to make the world a better place. Here are some highlights from the speeches.

Colbert is a master of making hard news hilarious. He did something similar in his speech to the University of Virginia. After jokes about study drugs, Playboy and plagiarism, he quoted Thomas Jefferson, third president of the U.S. and author of the Declaration of Independence, to make the point that Millennials can, like the founding fathers, use tough times for good. The highlight was when he held up a Time magazine with a cover declaring Millennials the “me, me, me” generation:

Your generation needs everything to be about you and that’s very upsetting to us baby boomers because self-absorption is kind of our thing. We’re the original ‘me generation.’ We made the last 50 years all about us. We took all the money. We used up all the government services and we deep-fried nearly everything in the ocean.

If you must find your own path—and we have left you no easy path—then decide now to choose the hard path that leads to the life and the world that you want. And don’t worry if we don’t approve of your choices. In our benign self-absorption, I believe we have given you a gift, a particular form of independence, because you don’t owe the previous generation anything. Thanks to us, you owe it to the Chinese.

The rich and powerful woman told graduates of Smith, a women’s college, that the pursuit of riches and power is only working for those who make drugs for stress, heart disease and sleeplessness:

She doesn’t want the next generation to be “fueled by stress, sleep-deprivation, and burnout,” so she suggested, “sleeping your way to the top.” By this she meant literally sleeping:

In 2007, sleep deprived and exhausted, I fainted, hit my head on my desk, broke my cheekbone and got four stitches on my right eye… even as it’s affecting our health, sleep deprivation will also profoundly affect your creativity, your productivity, and your decision-making. The Exxon Valdez wreck, the explosion of the Challenger Space Shuttle, and the nuclear accidents at Chernobyl and Three Mile Island all were at least partially the result of decisions made on too little sleep.

The U.S. First Lady reminded the audience at historically-black Bowie State University, founded just two years after the Emancipation Proclamation, of how hungry its founders had been to learn.

Hungry to get what they needed to succeed in this country. And that hunger did not fade over time. If anything, it only grew stronger. I mean, think about the century-long battle that so many folks waged to end the evil of segregation. Think about civil rights icons like Thurgood Marshal [and] Dr. King, who argued groundbreaking school integration cases, led historic marches, protests, and boycotts.

Then she took the current generation to task for not fighting as hard for education:

More than 150 years after the Emancipation Proclamation, more than 50 years after the end of “separate but equal,” when it comes to getting an education, too many of our young people just can’t be bothered. Today, instead of walking miles every day to school, they’re sitting on couches for hours playing video games, watching TV. Instead of dreaming of being a teacher or a lawyer or a business leader, they’re fantasizing about being a baller or a rapper. Right now, one in three African American students are dropping out of high school. Only one in five African Americans between the ages of 25 and 29 has gotten a college degree—one in five.

But she also said the class of 2013 can change this:

No matter what career you pursue, every single one of you has a role to play as educators for our young people. So if you have friends or cousins or siblings who are not taking their education seriously, shake them up. Go talk some sense into them. If the school in your neighborhood isn’t any good, don’t just accept it. Get in there, fix it.

Now that’s advice worth spending a few hours in a sweltering gym to receive.