Should a professor be allowed blow-up dolls in his office? 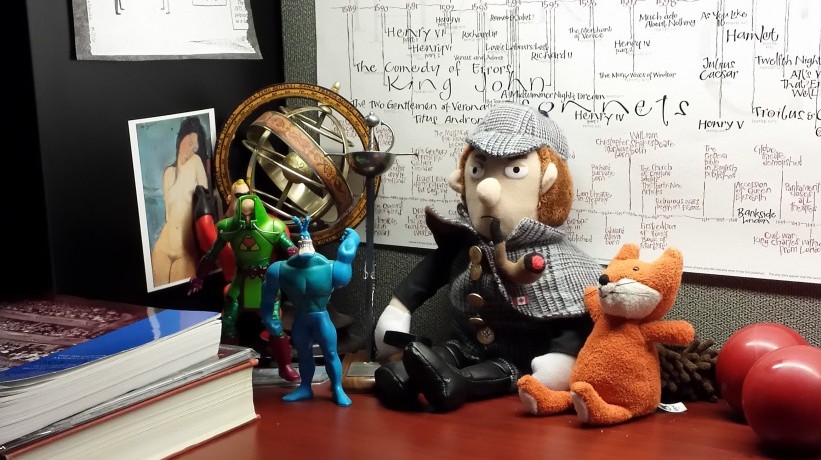 Professor Pettigrew’s office, which does not contain blow-up dolls

When people think about professors doing their jobs, they often imagine them in classrooms, or possibly labs, or maybe libraries or archives. But when we are on campus, professors typically spend most of their time in their offices. And to those inside the ivory tower, there is no space more interesting. Indeed, I have often longed to write about the peculiar nature of the professor’s office: so central and yet so overlooked. Sadly, in today’s media world, one needs an unusual story or live controversy to give a post a sense of timeliness. And, to be sure, very few odd news stories are based around professor’s offices.

So imagine my delight when I learned that University of Saskatchewan business professor David Williams has been forced to redecorate his office and to remove—wait for it—his “inflatable dummies and profanity-ridden inspirational posters.” According to reports, Williams referred to the blow-up dolls as his “executive team” and was in the habit of leaving them sitting in his office while he was out. Few details are available about the supposedly profane posters, though the professor maintains they were simply satirical.

The university for its part has said little but media reports quote Williams’ Dean saying that the office decor was “creepy.”

To those outside the academy such a story may go beyond strange and verge over into incomprehensible. A professor with dolls and vulgar posters? How does such a thing even happen?

The answer lies in the peculiar and multi-faceted nature of the modern professor’s office.

From the point of view of the prof, the office is a personal space. They are ours. Not just contractually, but morally. When I was an undergraduate, profs at Western were fighting tooth and nail to retain their right to smoke in their offices. I’ve known profs who kept dogs their offices. And I don’t know any professor who hasn’t decorated their office to suit their personal tastes, and, yes, idiosyncrasies. Here is a partial list of items in my own office (where I am composing this post at this very moment):

One postcard showing a Madigliani nude

You see the point. My office isn’t just a place where I work. It’s a place where I spend a great deal of my working life. I want to be comfortable here. More importantly, I want the office to give people a bit of a sense of who I am. Especially that I am not just a stuffy academic only interested in the finer points of poems and plays.

At the same time, professors are professionals and the university is a serious institution, and so the office is also a professional space. For this reason, despite the fact that my office contains its share of oddities, I try to keep it reasonably tidy and functional. And I must admit, I wish some of my colleagues did likewise, because I think it reflects badly on all of us when a student arrives at a prof’s office and can’t sit down because all the surfaces are covered with, ahem, crap.

Which brings us to a third aspect of the professor’s office: it’s a teaching space. Even in this day of electronic communications, students still sometimes want to consult in person, and, indeed, we encourage them to do so. We can’t complain that students never come to see us in our offices (which we do) and then not make some effort to make it a welcoming space (which we should). Whether any student ever actually complained about Williams’ office is uncertain.

With all this in mind, how something like Williams affair could happen makes a lot more sense. Because the demands of the three parts of the professor’s office—personal space, professional space, teaching space—are not always consistent. A prof’s personal tastes may not jibe with the university’s standards of professionalism. Nor may it mesh with a student’s expectations of scholarly decorum. And sometimes those standards are not reconcilable. Sometimes, administrators and students have to look the other way. Other times a professor’s sense of pride—and his blow-up dolls—get deflated.

What’s really surprising is that it doesn’t happen more often.