What students are talking about today (Aug. 15 edition) 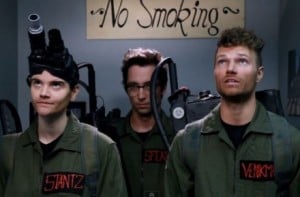 From Rich Aucoin music video "It"

1. A burglar broke into Steve Jobs’ house in California and stole the late Apple co-founder’s wallet, jewelry and computers. The thief was tracked down after he turned on a stolen iPad which broadcast his location. Not too smart.

2. A recent Columbia University graduate and model in New York is suing Volvo, Hertz and the Ford Models agency for $23-million because of a photo she didn’t want used. “It looks like something you’d see in the old yellow pages directories under escort services,” said her lawyer.

3. Pop star Rich Aucoin is shooting a video on August 20 and 21 at the Halifax CBC building. It will tell the story of Brian Wilson from the Beach Boys. Aucoin’s Facebook page says they’re looking for extras to play “stewardesses, California girls and a ton on background for crowd scenes.”

4. Cornell University has hired DJ Afrika Bambaataa as a visiting scholar for three years. This isn’t the first time hip-hop courses have been offered at university. An Ethics and Hip Hop course at Rice U. attracted Lupe Fiasco and Talib Kweli. Georgetown U. has a course on Jay-Z. In Canada, hip-hop courses have been taught at the University of Toronto Scarborough and Concordia University.

5. A McGill graduate and football fan says he’s “shocked and appalled” that the McGill Redmen football team had made an application to join the Ontario University Athletics football conference, leaving behind the Réseau du sport étudiant du Québec. The fan says he’s upset in part because partnerships in realms such as football are what “make Quebec society work.”

6. Only at the University of Guelph… An Equine Journalism course will be offered online over 12 weeks this fall. “Students will learn key journalism tools and gain advanced skills that will open doors to the equine publishing market,” says StandardbredCanada.ca.

7. Wilfrid Laurier University has notified 200 former students that there is an “extremely low risk” they may have contracted a blood-borne disease after taking part in blood-lactate-level testing in classes between 2002 and 2011. The blood sampler used was not meant for multiple people.

8. Western University president Amit Chakma has given the federal government his report on internationalizing Canadian higher education. In short, he wants more students coming here (450,000 over 10 years) and more Canadians going abroad (at least 50,000 of them). Maclean’s columnist Paul Wells has been following the internationalization debate closely. His thoughts here.

9. The Supreme Court of Canada’s bench should always have at least four women on it, says retiring Justice Marie Deschamps. It currently has four women and five men.

10. Not everyone loves Marineland. The sea-themed amusement park in Niagara Falls, Ont. has animals that were made sick or blinded by unhealthy water, according to eight former employees who spoke to The Toronto Star. Owner John Holer, denies there are problems with water quality.