What students are talking about today (Aug. 21 edition) 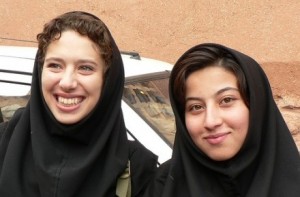 1. Iran has banned women, who make up 60 per cent of its university students,  from 77 subjects including accounting, engineering and pure chemistry. At the University of Tehran, forestry and mathematics are off limits too. Last year, President Mahmoud Ahmadinejad considered segregating men and women entirely on campuses. Could this new ban be punishment for all the women who protested his apparent election fraud in 2009?

2. An Oklahoma high school valedictorian was denied her diploma because she said the word “hell” during her commencement speech and then refused to apologize. Kaitlin Nootbaar quoted a commencement speech from the Twilight series film Eclipse. “I quoted, ‘They ask us now what we want be and we say who the hell knows,'” she told The Toronto Star. She meant to say “heck.”

3. Settling confusion about whether the Parti Québécois would re-freeze tuition in Quebec, leader Pauline Marois said she could forsee “a slight increase, going up with the cost of living.” Her party, which wore the Red Square of the student movement during this year’s student boycotts, is the main challenger to the embattled Liberals of Premier Jean Charest in the Sept. 4 election.

4. The director of off-campus housing at Lakehead University says there may be a student housing shortage because flooding in Thunder Bay in May left many basement suites unusable.

5. Yet another study says that staying up late to cram for tests leaves student worse off than had they gotten a good night’s sleep. Remember this: sleep helps file away what we learn each day. If we don’t get enough of it, our brain doesn’t have time to store the information we studied.

6. Greg Mountenay took a month-long road trip to visit more than 300 of his Facebook friends this summer. He launched the Great Canadian Road Trip 2.0 on July 11 in Peterborough, Ont. and just got home. The Trent University graduate traveled all the way from Halifax, N.S. to Victoria, B.C.

8. An American professor says that students raised in the world of social media are prone to “oversharing.” One student told the prof she’d missed class to “terminate a pregnancy,” a second because she had been in rehab, a third because he had to go to court and a fourth because she was having an affair. What we really want to know: did those excuses work?

9. West Virginia University has been named the Top Party School in America by The Princeton Review. Utah’s Brigham Young University, fully owned by The Church of Jesus Christ of Latter-day Saints, surprised no one by topping the list of Stone-Cold Sober Schools for the 15th year.

10. It has been almost a year since Jack Layton died on Aug. 22, causing a country to mourn the leader who brought his New Democrats to previously unimagined heights mere months earlier. This week’s Maclean’s has the poignant inside story of Layton’s last letter, in which he wrote: “Love is better than anger. Hope is better than fear. Optimism is better than despair.” Words to live by.