What students are talking about today (Aug. 29 edition) 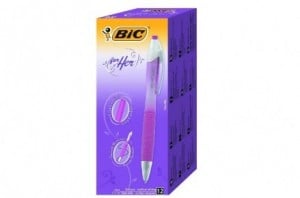 1. People are outraged about a new line of pens called “Bic for Her” that come in a purple package. One obvious reason for their anger: the gendered Bics cost 70 per cent more than the regular Bics.

2. McGill University set the Guinness World Record for the world’s biggest fruit salad yesterday, 5,083 kilos to be exact. Today, Ryerson University will attempt something more modest—the most people ringing cowbells all at once for two minutes. The current record is 640.

3. We now know more about the cyclist killed in Edmonton on Monday by a cement truck. Isaak Kornelsen was a track and field athlete at the University of Alberta who ran both middle and long distances. He founded a philosophy club in high school and was the valedictorian. Rest in peace.

5. Michael Rafferty, the man who murdered eight-year-old Ontario girl Victoria Stafford in 2009, was still showing up in the dating site of Plenty of Fish until Tuesday. His image was attached to a profile belonging to someone named “scoobmike,” purportedly from Saskatoon, Sask. Very creepy.

6. A Jewish student at Michigan State University says he was the victim of an anti-Semitic hate crime at a party where his jaw was broken and his mouth was stapled shut. Police deny the attack was a hate crime, but the student says he endured anti-Semitic chants and Nazi salutes before the attack.

7. The University of Montana is requiring all students to complete an online video tutorial about sexual assault and score 100 per cent on a quiz before they can register for classes.

8. Five of the women who will appear on The Bachelor Canada this fall have been revealed. They include a pastor from Alberta, a Playboy bunny from Vancouver and a university recruiter from Moncton, N.B. They will compete for CFL free agent Brad Smith on the Citytv reality show.

9. Residents of New Orleans hunkered down as Hurricane Isaac made landfall nearby on the seventh anniversary of Hurricane Katrina, which killed more than 1,500 people.

10. A zoo in New Brunswick says a 19-year-old squirrel monkey named Hercules was stolen overnight and zookeepers are worried. The RCMP are investigating.