What students are talking about today (Aug. 31 edition) 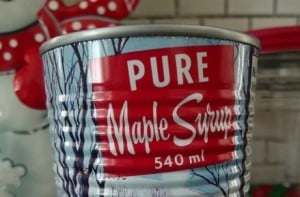 1. Thieves in Quebec stole $30-million of maple syrup from a warehouse in St-Louis-de-Blandford, 160 kilometres northeast of Montreal. You may think this is funny until you realize that it affects maple syrup prices for all of us. It’s a clear sign we need more offshore production.

3. Harvard University is investigating 125 students for cheating on a take-home final exam. Nearly half of the students in an introductory government class are suspected of jointly coming up with answers or copying off one another. It’s a sad day folks: the honour system has been discredited.

4. Not everyone found Ryerson’s most cowbell ringers Guinness World Record attempt as fun as I did. My colleague David Newland says “what was celebrated at Ryerson was the victory of something empty over something meaningful.” I don’t know that he’s right. I think getting 1,003 self-conscious Ontarian teenagers to do anything in unison is impressive.

5. The CRTC, our telecommunications regulator, is about to make some new friends (for once) on Saturday. Television commercials will be legally required to stay at the same volume level as TV shows, ending the annoying practice of cranking the ads up so that we can’t ignore them.

6. Republicans were squirming last night as ‘surprise’ convention speaker Clint Eastwood had a conversation with an empty chair. For a chuckle, check out Maclean’s humourist Scott Feschuk’s rendition of the evening. Mitt Romney’s speech has been getting mixed reviews, although he did get the crowd roiling in Tampa when he made fun of the idea of human-caused climate change.

7. Acadia University has released its response to a report by Dr. Robert Strang, Nova Scotia’s Chief Medical Officer of Health, on reducing the harm from alcohol on campus. This comes just one year after a first-year student from Calgary died after drinking in residence. The plan is sweeping.

8. James Holmes, the man who killed 12 people and injured 58 others at the premiere of The Dark Knight Rises in Aurora, Colo., called his psychiatrist nine minutes before he opened fire, a court heard Thursday. We also learned that, after an interview, the University of Iowa’s neuroscience program director warned colleagues: “Do NOT offer admission under any circumstances.”

9. Four university students are homeless after someone burned down their duplex near Cape Breton University in a suspected arson. Two of the four were inside the home at the time.

10. Nearly 1,300 employees at Nova Scotia universities pulled in more than $100,000 in the last fiscal year. This is the first year universities there are legally required to list the names of highly-paid public employees.  Student leaders say they’re outraged. Perhaps a better plan is to study hard and aim for a coveted professor job. See professor pay ranked from highest to lowest.