What students are talking about today (December 11th edition) 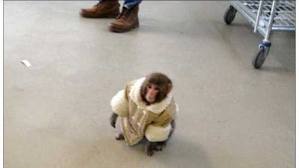 1. Your obligatory Darwin the monkey news roundup: In a little over two days since his spontaneous romp through a Toronto Ikea parking lot, the rhesus macaque monkey has achieved international celebrity, even getting the Daily Mail treatment usually reserved for footballers’ wives. Darwin is headed for a sanctuary northeast of Toronto, but the Canadian Press reports that his owner wants him back. Enough monkey business – get back to studying.

2. The University of Windsor announced Monday that education dean Clinton Beckford has been suspended “in recognition of an academic integrity breach involving plagiarism.” University of Windsor president Alan Wildeman told the Windsor Star Beckford will return as “a contributing member of the faculty,” though not as dean, but wouldn’t say how the incident came to the university’s attention. Beckford’s unpaid suspension will last until June 30, 2014.

3. Immigration Minister Jason Kenney announced in November his intention to fast-track residency for foreign students studying in Canada under the Canadian Experience Class Program, but this CBC story looks at the darker side of post-secondary education and immigration: recruiters who prey on students and make false promises. The CBC reports that Vipul Patel filed a complaint with the Immigration Consultants of Canada Regulatory Council (ICCRC) claiming he was duped by a Toronto-based consulting firm about timelines and language skills to immigrate from India to Quebec. Patel’s complaint is still under review by the ICCRC, which acknowledges that international students are “often victims of abuse” in an open letter on its website.

5. Police in Abbotsford, B.C. are using an unusual tactic to try and curb drug and gang violence: Christmas cards. The Canadian Press reports that the Abbotsford Police Department mailed between 50 and 100 prolific criminal offenders in the area a card depicting Santa (Abbotsford Police Chief Bob Rich incognito) dressed in police gear and toting a machine gun. A telephone helpline is listed inside along with the message: “We believe it is never too late to make a better choice for your life. For the sake of your family and for your own sake, consider 2013 the year you choose a new and better life.” Police spokesman Const. Ian MacDonald told CP whoever phones the helpline will receive a call back from someone with expertise.