What students are talking about today (December 4th edition) 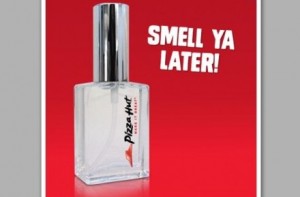 1. It was a marketing stunt and it worked. Pizza Hut Canada has given away a pizza perfume to 100 lucky Canadians. Thousands more are giving the scent their Facebook thumbs up while other are Tweeting about it. The Globe and Mail reports that the original cheesy version of the spritz didn’t smell good, so the final product  is more like “fresh dough with a bit of spice.” I can’t tell if this is really big news or if it’s just close to lunchtime.

2. For the second year in a row, more money was raised from Canadians than from of people in all the countries that participated in Movember. The total was $36.8 million from 247,066 mustache-growing Canucks. That money goes to Prostate Cancer Canada and Canadian Male Health Network.

3. A man in Manhattan died after he was pushed onto a subway platform and hit by an oncoming train. Ki Suk Han, 58, desperately tried to scramble back to the platform and the New York Post published a photograph of his struggle. The attacker, who had been yelling loudly, fled.

4. Future doctors, listen up. Prince Edward Island is offering $110,000 in signing bonuses and money to cover tuition for three medical students who commit to practicing family medicine in the province for at least five years. Preference will be given to Island residents. More in The Guardian.

5. Kim Kardashian’s weekend visit to promote milkshakes in the Islamic country of Bahrain did not lead to protesters being tear-gassed by police, a spokesperson told CNN. I’m still not so sure.

6. Ottawa Police will not lay charges related to the cycling death of Carleton University master’s student Krista Johnson who was killed by a car that hit her bike in October. Police are warning cyclists to be vigilant. “Do not drive while distracted, handheld devices can hamper your ability to drive a bicycle just as it would a motor vehicle,” they write. “Helmets are strongly recommended.”

7. Another student has reviewed Doug Saunders’ The Myth of the Muslim Tide. Charles Wagner of the University of Victoria’s Martlet has plenty of praise. “Saunders’ greatest asset is his ability to keep an emotional distance from this volatile subject matter. Just as I didn’t want his book to be an anti-Islam tirade, I didn’t want it to turn into apologetic Islamic propaganda either. While he debunks most of the anti-Islam claims, he does admit that there are some situations that call for worry.”

8. Bullying has been in the spotlight ever since the highly-publicized death of B.C. teenager Amanda Todd. Students at Brandon University in Manitoba have decided to try and take action by forming a new club, The Brandon University Anti-Bullying Society. More in The Quill.

9. Some students in Ontario are worried that the absence of extracurriculars in high schools affected by a provincial labour dispute will hurt their chances of university admissions or scholarships. The Ottawa Citizen has spoken to admissions officers who say that students can relax. Marks alone determine most entrance scholarships and admissions decisions.

10. Emma Teitel has succumbed to the frenzy surrounding Kate and Will’s royal baby-to-be: “I’ve chosen to accept it. Kate’s bump unites us as a nation. And it puts a twinkle in John Baird’s eye.”