What students are talking about today (December 7th edition) 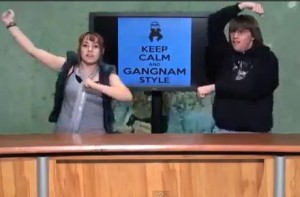 1. “This Gangnam Style parody made by high school students in New Holland, Pennsylvania, is so terrible it’s destined to outlive the original music video,” writes The Albatross. That may be going a little far, but there’s a reason this kooky video has a million clicks already. It’s hilarious!

2. A “possible abduction” at York University on Wednesday turned out to be just a prank, say Toronto Police. The pranksters had said they saw a person forced into a van by two men near the Fine Arts building. “Police have investigated the incident and spoken with the people involved. It has been revealed it was a prank played between the people involved,” they write.

3. Quebec’s universities say they were blindsided by a cut of $124-million to be implemented during the current school year. This comes as universities scramble to make up for revenue lost after tuition hikes were cancelled in September by the new Parti Québecois government.

4. Thursday was 23 years since Marc Lepine killed 14 women at Ecole Polytechnique in Montreal. It was also the day Prime Minister Stephen Harper rebuked his own firearms advisory committee, siding with police and gun control advocates by rejecting the committee’s recommendations for longer gun licenses. “Let me be as clear as I can be,” Harper told the House of Commons, “the government has absolutely no intention of weakening that category of protections.” (CP)

5. Also on Thursday, the Quebec government said it will create its own gun registry after Ottawa turns over Quebec data from the now-defunct federal long-gun registry. Alexa Conradi, president of the Quebec Women’s Federation, welcomed the news. “Controlling firearms is a really important and essential aspect of fighting violence against women,” she said at a rally in Montreal, reports CP.

6. A student says frequent sex by her roommate a few feet from her bed caused her depression and forced her withdrawal from Stonehill College, near Boston. A judge has now ruled she can go ahead with part of a lawsuit, which claims Stonehill didn’t offer “reasonable accommodations.”

7. The Breezeway student pub at Memorial University in St. John’s, Nfld. is facing a huge deficit. “Either the promotion of the Breezeway will have to get much more aggressive, with more concerts and events, or perhaps the campus bar will have to be completely rethought,” writes David Maher in The Muse. Or perhaps there shouldn’t be a pub if it’s repeatedly losing money.

8. On the other side of the country at UBC, the reopening of Koerner’s Pub has been delayed by negotiations between the Graduate Student Society (GSS) and the company planing to operate it. Koerner’s went out of business after racking up a $200,000 loss in 2010-11. The pub’s reopening was already delayed once because of a dispute with unionized pub staff. Yes, unionized pub staff.

9. Sadly, a nurse at London’s King Edward VII hospital who took a hoax call from a couple of Australians radio DJs about the Duchess of Cambridge has died of suicide. The Aussies had posed as the Queen and Prince Charles. The nurse who died was not, however, the nurse who had breached patient confidentiality by discussing Kate’s medical condition at length. Read more here.

10. NASA has released an “Earth at night” image made from data collected by the Suomi National Polar-orbiting Patnership satellite. It took 312 orbits and 22 days to make. More on Maclean’s.ca