What students are talking about today (November 23rd edition)

More Quebec protests, oil debate & democracy at U of T 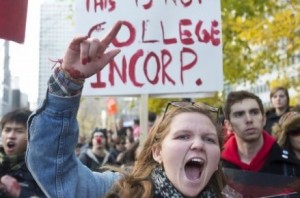 1. It’s that time of the month again. Several thousand students marched in Montreal Thursday to demand free tuition, despite already winning frozen tuition from the Parti Quebecois government. The demonstration was supported by the Association pour une solidarité syndicale étudiante, whose now-disbanded CLASSE wing was considered the most radical student group during the protests that shut down campuses earlier this year. Speaking of shutting down campuses, some students blocked certain entrances to the Université du Québec à Montréal on Thursday, reports the Montreal Gazette.

2. The University of Toronto Students’ Union’s annual general meeting drew a lot of angry voters who refused to approve the agenda at the beginning of Thursday’s meeting. While most AGMs are poorly attended, students waited in line for hours to get in to this one. Sam Greene, who heads of Trinity College, urged members to not approve the agenda unless the UTSU considers electoral reforms. Corey Scott, vice-president internal for UTSU, told The Varsity that the way students vote showed their “privilege.”

3. There is support among some of Canada’s premiers to ship Alberta oil to Eastern Canada. Two men whose provinces don’t have much oil themselves, Manitoba’s Greg Selinger and Nova Scotia’s Darrell Dexter, say they are interested, and Alberta’s Alison Redford and Quebec’s Pauline Marois agreed Thursday to examine the benefits and environmental effects of such a project.

4. Students at the University of Saskatchewan are dreaming of sunny winter slopes. The Sheaf offers a guide to picking out the right snowboard. Meanwhile in Ontario it still feels like spring.

5. Who knew there is such a thing as conservative campus radio hosts? Dylan De Leskie has written a farewell column in the Arthur where he talks about his five years on Trent Radio.

7. The Gauntlet at the University of Calgary is taking on Uganda’s parliament in an editorial. A bill could pass in the African country in December that would impose the death penalty on some homosexuals and allow police to jail people who don’t report “suspected gays” within 24 hours.

8. Egypt’s Islamist president Mohamed Morsi decreed Thursday that his powers place him above any court. Nathan J. Brown, who studies Egypt’s legal system at George Washington University, told The New York Times the decree amounts to: “I, Morsi, am all powerful. And in my first act as being all powerful, I declare myself more powerful still. But don’t worry — it’s just for a little while.”

9. Canadian Business is out with its annual list of the Top 20 richest Canadians. At $20-billion, the Thomson family is on top. They have big stakes in The Globe and Mail and the Winnipeg Jets.

10. Here is a photo that appears to show one the world’s top 20 richest squirrels.