What students are talking about today (November 26th edition) 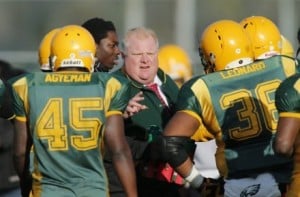 1. Toronto Mayor Rob Ford has been removed from office and has 14 days to vacate his seat after a judgment from Ontario Superior Court Judge Charles Hackland. Ford violated conflict of interest rules by voting during a February council meeting on whether he should be forced to repay money he solicited from city lobbyists and businesses for his football charity. Toronto New Democrat MP Olivia Chow says she may run.

2. After accepting the Diamond Jubilee Medal—in overalls—from the prime minister, Justin Bieber was booed by the crowd during the halftime show of the Grey Cup final in Toronto on Sunday. The Canadian Press says 74-year-old Gordon Lightfoot better captivated the crowd. The Argonauts won 35-22.

3. In more bad news for Bieber, he’s no longer YouTube King. Korean rapper Psy’s video for Gangnam Style surpassed Bieber’s Baby as the most-viewed ever at 806 million and counting.

4. Also in football, Laval University enacted revenge on the McMaster Marauders to take the Vanier Cup on Friday. The Rouge et Or won 37-14 after losing in double overtime to Mac last year.

5. A new study offers mixed news for new graduates seeking jobs. A survey of 450 employers who recruit on campuses found that overall on-campus recruitment will increase next year, but there will be drops in Ontario and B.C. The Canadian Association of Career Educators and Employers’ study also found that the average wages for recruited grads fell five per cent last year to $51,014.

6. There were four separate attacks at York University in Toronto this past week. A 20-year-old woman was sexually assaulted just before 5 p.m. Friday after exiting a bus, another student was hit with a piece of metal, and two others were robbed at knife point, reports the Toronto Star.

7. Camille Gregory received her bachelor of science degree from UBC just days before her death from cancer in September. The Ubyssey has just published a beautiful obituary about Gregory, who was a successful athlete, a model in Japan, a promising scientist and friend to many people.

8. Another 1990s revival concert is being planned. The Broadway Theatre in Saskatoon’s fundraiser on Nov. 27 will feature song from Big Shiny Tunes 2. The 1997 compilation CD from Much Music, with tracks from Radiohead and Bran Van 3000, sold more than a million copies.

9. Today’s Google Doodle is a portrait of Mr. Dressup. Ernie Coombs, the Canadian children’s entertainer and tickle trunk owner, would have turned 85 today had he not died of stroke in 2001 .

10. The Queen’s Journal has taken a stand against Faith McGregor’s demand for a haircut from Muslim barbers who refused because she is a woman. “A haircut isn’t a fundamental human right,” they write. They also argue it’s not misogynist because it’s “a matter of religious beliefs” and that McGregor is wasting the time and money of the Human Rights Tribunal and Canadian taxpayers.