What students are talking about today (November 30th edition) 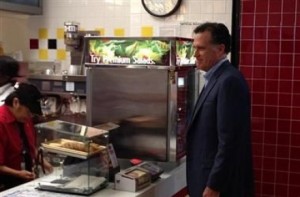 1. Mitt Romney stopped by a McDonald’s on Thursday before his lunch with Barack Obama. (I guess he doesn’t like turkey chili.) National Post points out that Romney’s father often lent him a card that entitled him to free hamburgers for life. You read that correctly. America’s most famous rich family got free hamburgers… for life.

2. Speaking of hamburgers, The New York Times reports that Thursday saw the most job action among fast-food workers on a single day in U.S. history. A union drive called Fast Food Forward wants wages raised to $15 an hour. “How can we survive on seven twenty-five?” was the chant outside a Burger King in New York. The U.S. federal minimum wage is $7.75.

2. On the last day of Movember, Stephen Clare of McMaster’s Silhouette is reminding his mo bros (and ladies) about the real meaning of the season. “Be honest. How many people do you know enjoying a lip-warmer this month? Many. Now how many of those have donated to the cause?” He says raising awareness isn’t good enough and that people should donate to men’s cancer research.

3. The search for a student missing from Mount Allison University in Sackville, N.B. has been scaled back. Christopher Metallic, 20, has been missing since a house party on early Sunday morning.

4. With the NHL players still locked out, The Manitoban reports that U of M students are talking about basketball. The student newspaper offers a guide to choosing an NBA team to cheer for.

6. It’s being called “Replyallcalypse.” Someone in New York University’s Bursar’s Office sent an e-mail to 40,000 students with the wrong settings and a student mistakenly replied to all of them. That prompted thousands more messages including one that was just a photo of Nicolas Cage.

7. Europe’s first gay and lesbian-friendly mosque opens on Friday in a Paris suburb, reports The Province. The mosque will defy traditions by welcoming transgender and transsexual Muslims, seating men and women together, and allowing women to lead prayers.

8. Jane Lytvynenko writes in Ottawa’s Fulcrum in support of a New Democrat private member’s bill, now in its third reading, that would amend the Canadian Human Rights Act and the Criminal Code” to include gender identity and gender expression as prohibited grounds for discrimination.”

9. Shortly after the United Nations General Assembly voted 138-9 Tuesday to recognize Palestine, information officer Nancy Groves sent out the Tweet: “On Day of Solidarity with Palestinians, Ban Ki-moon stressed urgency of reaching 1-state solution.” She meant to write “two-state solution” and It took 30 minutes to correct the error. Some called it a “Freudian Tweet.” More in the Star.

10. Toronto police were investigating alleged serial killer Luka Rocco Magnotta months before he killed Chinese Concordia University student Jun Lin in May, according to CBC’s the fifth estate. Online activists had contacted police about a video and a detective replied three months before Lin’s death, writing: “I want to bring him before the courts even if just to get him psychiatric help.”