What students are talking about today (October 1 edition) 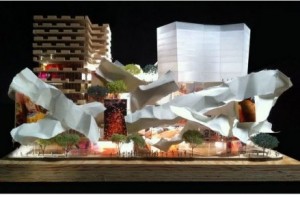 A Toronto development that would include 80-story towers and space for OCAD U. (Gehry International)

1. Students at Western University in London, Ont. had their homecoming weekend marred by the shooting death of 21-year-old Terrell Johnson off-campus early Sunday. A 28-year-old man was also taken to hospital. Joshua Carter, 22, is charged with second-degree murder.

2. Hannim Nur, the student who resigned from her post as president of the University of Regina’s Students’ Union (URSU), did so because she stole $700 of student money from the Canadian Federation of Students Saskatchewan by forging signatures on cheques when she was Chair. A statement from CFS-S says that the money was repaid and that they’ve updated procedures to reduce the chance of it happening again. Questions remain as to why Nur continued to work at URSU after she admitted the forgery to CFS.

3. A proposed mega-development on King Street in Toronto will house a whole lot of people in three 80-story condo towers. It will also include two museums and facilities for nearby OCAD University. The design is by Frank Gehry and the funding is from theatre king David Mirvish. Tweeters have compared the design to a tipped-over recycling bin, but Edward Keenan of The Grid points out that Gehry’s early sketch of the now-loved Art Gallery of Ontario once raised eyebrows too.

4. Students at SAIT in Calgary are dealing with cockroaches in East Hall residence. Exterminators have set up traps and students have been given containers to put dry food in to protect it from bugs. The school says it learned of the problem in September. Students aren’t happy, but they should look on the bright side. SAIT is probably going to be more helpful than most landlords.

5. St. Thomas University suspended its men’s rugby team for one game due to underage drinking at a party that violated the athlete code of conduct. The rules were strengthened after a 21-year-old STU student died in Oct. 2010 following a booze-fuelled volleyball initiation party.

6. An Edmonton professor who tutors Omar Khadr says the prisoner should be given the chance to re-enter society and that her institution would welcome him. Arlette Zinck, an English professor at Christian institution King’s University College, told CBC News that she thinks the convicted killer “stands a very good chance of making a significant positive contribution to Canadian life.”

7. A 26-year-old Canadian visiting Munich’s famous Oktoberfest died after being hit by a tram.

8. A small fire at a University of Victoria residence on Sunday appears to have been caused by an electrical failure related to speakers that were sitting atop a refrigerator. No one was injured.

9. A 20-year-old man was charged with administering a noxious substance after a Sept. 14 incident at a Waterloo, Ont. night club when someone reported seeing something in their drink—possibly a date-rape drug. Police are investigating an earlier incident they believe may be related.