What students are talking about today (October 15th edition) 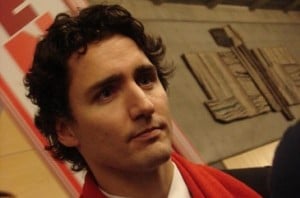 1. In the wake of Justin Trudeau’s announcement that he will run for the Liberals, a new Nanos Research poll puts the party in second place for the first time since April. The Conservatives have 33.3 per cent support, the Liberals have 30.1 per cent and the NDP is at 27.9 per cent. The Liberals are now in first place in Ontario and B.C., while Quebec still strongly supports the NDP. The Conservatives gained in Atlantic Canada.

2. Three players from the Cuban men’s soccer team who vanished before a World Cup qualifying match in Toronto defected, according to FIFA.  “As with any Cuban sport team that travels around the world, they’re all chasing the American dream,” coach Alexander Gonzalez told The Canadian Press. Or the Canadian dream.

3. After five years preparing, Austrian daredevil Felix Baumgartner jumped from the edge of space on Sunday. He hit speeds of 1,336 kilmotres per hour after leaping from nearly 39 kilometres above the New Mexico desert. His free fall was four minutes long. He said he had tears in his eyes.

4. British Prime Minister David Cameron has agreed to a 2014 vote on Scottish independence.

5. Women in Guangzhou, China are shaving their heads to protest gender discrimination. University admissions are gained through a National Higher Entrance Exam, the Gaokao, and some universities require that women have higher test scores than men have to be admitted.

6. A sickening flier posted in the men’s washroom at a Miami University in Ohio listed the Top Ten Ways to Get Away with Rape, including things like slipping drugs into women’s drinks. There have been at 27 reported sexual assaults at the university since 2009, according to Cincinnati.com.

7. MPs will debate an NDP motion on Monday in favour of a national anti-bullying strategy following a weekend of vigils in remembrance of Amanda Todd, the 15-year-old Port Coquitlam, B.C. girl who killed herself last week after posting an anti-bullying video on YouTube.

8. RCMP say that they may lay charges related to Todd’s suicide.

9. The Montreal Gazette is asking whether Concordia University has “learned its lesson” after losing two presidents in three years and paying millions of dollars in severance and fines. Concordia says it is acting on most of the recommendations of an external review.

10. Art students from OCAD University in Toronto are supporting Soupstock 2012, a gathering over more than 160 Canadian chefs that is a fundraiser against a planned mega-quarry on farmland near Shelburne, Ont. They set up a poster exhibit against the mega-quarry at a local restaurant.