What students are talking about today (October 2 edition) 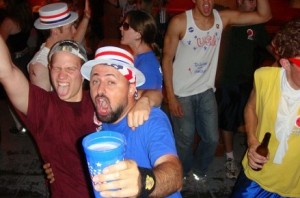 A party in the U.S.A. (methTICALman/Flickr)

1. I was hoping I wouldn’t have to report this, but public safety is at risk (seriously). A University of Tennessee student was hospitalized with a dangerously high blood-alcohol level after his fraternity, which has now been suspended until at least 2015, allegedly gave him an alcohol enema. Students call this “butt-chugging.” The apparent victim denies it, but such things have happened. At least one student died this way in 2005, according to Inside Higher Education.

2. This could be a game-changer. California’s governor has signed a law that will make more than 50 core textbooks free to download. Hard copies will cost just $20. I’ll bet it’s only a matter of time before this idea catches on here.

3. A Queen’s Journal columnist has explored the trend of #FirstWorldProblems after a life-changing event that happened while waiting in line with a friend for a latte. “We were informed that our Starbucks rewards no longer included free flavour shots,” writes Trilby Goouch. “As regular flavour shot users, we were both a little rattled by this new information.” First World Problems indeed.

4. The Carillon student newspaper is trying to figure out the timeline in the forged cheque scandal. Former University of Regina Student Union president Haanim Nur confessed to having forged and cashed Canadian Federation of Students Saskatchewan cheques totaling $700 and attempting to cash a third cheque worth $300, which was cancelled after the bank noticed and informed CFS-S. CFS-S said the irregularities in the bank account were first noticed in “early 2012.” Nur’s resigned in June. The incident only came to light in September. Why didn’t students know sooner?

5. The University of Toronto may increase security at Robarts Library after the arrest of George Williams, 50, who is accused of three sexual assaults in the building since January 2011.

6. Richard Wagner, a Quebec appeals judge, has been nominated by Stephen Harper to replace Marie Deschamps on the Supreme Court of Canada. Deschamps won’t be pleased. She had hoped Harper would appoint a woman. Four of nine justices were women until her retirement in August.

7. Undergraduate engineers at Concordia University have won an awesome prize in the Canadian Satellite Design Challenge. Their satellite design will be launched into space in 2013.

8. Memorial University held auditions for the annual Rant Like Rick contest on Monday. Students will compete for a top prize of $1,000 on Oct. 22 with short speeches modeled on the political rants of Newfoundland’s famous son, Rick Mercer. (Check out an excerpt of his new book here on why he rants.) Last year’s RLR winner gave forth on TLC reality show Toddlers in Tiaras.

9. Seth MacFarlane, creator of Family Guy, will host the Oscars. Maclean’s writer Jamie Weinman ponders the pick. “It seems like an odd, unfamiliar choice,” he writes. “But the Oscars are always on the lookout for hosts who can attract the Young People without driving away the Old People.”

10. Jessie Brown, Macleans.ca technology columnist, asks an even more important question. After Justin Trudeau Tweeted about finding the whale in xkcd’s Click and Drag (yes, I have no idea what that is either), Brown asks, “is the newest contender for Liberal party leadership actually a geek, or is he just pandering to the geek vote?” He then considers the record in full. Watch out Harper.