What students are talking about today (October 24th edition) 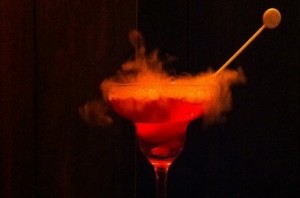 1. The Peak student newspaper at Simon Fraser University is warning students against cocktails containing liquid nitrogen, which is added by some daring bartenders who want to impress drinkers with the ensuing cloud of vapour. The reason for the warning: The Daily Mail newspaper says a British student who chugged two “Nitro Jagermeisters” ended up with a perforated stomach. Ouch.

2. “It wasn’t exactly the most successful pick-up attempt,” writes Julian Uzielli of Western’s University’s The Gazette. A student briefly lost consciousness and was taken to hospital last Wednesday after being injured in The Spoke pub. “He basically tried to pick up a girl really high in the air, and she fell on him, and he fell backwards and he hit his head,” student Tony Ayala told the newspaper.

3. People in Toronto’s Cabbagetown neighbourhood, not far from Ryerson University, are frightened by a killer who stabbed a woman, in her 50s, early on Tuesday. Toronto police released this security camera footage of the victim being followed around 7 a.m. The suspect is a white male.

4. The University of Alberta science faculty is raising admission requirements in an effort to reduce enrolment, which is 600 students higher than provincial funding covers, reports The Edmonton Journal. High school graduates will now need at least 80 per cent to be admitted. At the same time, the faculty is planning to hire some “super star” professors, says dean Jonathon Shaefer.

5. The B.C. government is planning to make online bully reporting available to all students.

6. The University of Manitoba is rewarding those who carpool by giving them the best parking spaces. The 24 exclusive spots will be enforced using the honour system. Good luck with that.

7. The Canadian Federation of Students went to Ottawa to lobby the federal government for a “national education act” and lower tuition. Not all students agree with the lower tuition lobbying. Ryerson’s Eyeopener points out that while it’s unfortunate Ontario students are starting their careers with big bills, the alternative is a deeper provincial debt, which is already way too high.

8. Speaking of the Canadian Federation of Students, a Carleton University student was charged with destroying property after cutting up a CFS banner in a campus pub. It read “Drop Fees.”

10. In case you missed it in the print edition, Daniel Craig gave a rather revealing interview to Maclean’s (genius) film critic Brian D. Johnson, who says that Skyfall is the best James Bond film yet. One choice quotation: “Lots of people suggested to me that [Javier Bardem’s character] is a homosexual. I don’t think he’s homosexual—I just think he likes f–king things.”