What students are talking about today (October 25th edition) 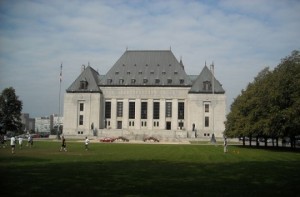 1. The Supreme Court of Canada has ruled that Conservative MP Ted Opitz legitimately won his seat in the Toronto riding of Etobicoke Centre in the 2011 federal election, but the court was split 4 to 3. Opitz appealed an Ontario Superior Court ruling that set aside his victory over Liberal incumbent Borys Wrzesnewskyj because of procedural irregularities with 79 ballots. The Supreme Court overturned the ruling, deciding that 59 of those votes should count, reports The Canadian Press. The lesson: every vote matters.

2. A Twitter account dedicated to highlighting “dimes” and referencing “sluts” at UBC Vancouver has been removed. University officials told The Province newspaper that several varsity athletes, including hockey players, were behind the @UBCDimeWatch handle. “Dime” is a slang term for a woman whose appearance might be called a “perfect 10.” Photos were apparently posted without women’s permission. That’s a bit creepy.

3. The UK Border Agency’s decision to revoke London Metropolitan University’s license to sponsor overseas students strengthened the image of UK higher education, says Jason Kenney, Minister of Citizenship, Immigration and Multiculturalism. He told Times Higher Education that Canada intends “to go the same direction,” noting what he calls, “many sub-par institutions that are not providing quality programmes, and which are mostly facilitating various forms of legal migration.”

4. A Brock University hockey player, originally from St. John’s, Nfld., has been found guilty of two counts of sexual assault related to “rough sex” with two women he met at a campus pub.

5. Edmonton city staff recommend upping the price of student transit passes by 20 per cent. Roughly 60,000 students would be charged $30 more per year. Student leaders will fight it.

6. During an appearance on Jay Leno’s The Tonight Show, U.S. President Barack Obama urged the NHL and its players to resolve their labour dispute . Either way, a full season is looking unlikely.

7. Guests at the Italy wedding of pop star Justin Timberlake and actress Jessica Biel were treated to a video from a guest that featured toothless and homeless people in Los Angeles offering their apologies for not making the wedding. The website Gawker suggests it was in bad taste.

9. Speaking of Psy, The Carillon student newspaper at the University of Regina doesn’t think you should dress as him this Halloween, if only because so many other people will. Their list of “Five Terrible Costumes” also suggests that referencing racial stereotypes is off-limits.

10. At Queen’s University, group costumes are in: the Cast of Trailer Park Boys, Smurfs, the T-Birds from Grease, Anchorman’s Channel 4 News Team and even the Homecoming Police. There are plenty of other ideas in this Queen’s Journal article. Get on it: Halloween is only a week away.