What students are talking about today (October 3 edition) 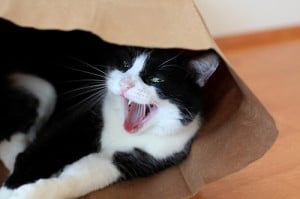 1. Japanese researchers have published an article in PloS ONE entitled “The Power of Kawaii: Viewing Cute Images Promotes a Careful Behavior and Narrows Attentional Focus.” In sum, viewing photos of cute animals could make you more productive at work. Thank you Japan.

2. Speaking of important cat research, a powerful 2011 earthquake has affected the psychological state of cats in Turkey. They are attempting suicide on a regular basis, according to Abuzer Tas, a lecturer in a local veterinary school. “After the quake… a large number of cats are throwing themselves from heights,” he said. Seriously.

3. A student group at the University of Saskatchewan offered cookies for human souls last week as part of International Blasphemy Day, an annual demonstration on the anniversary of the publication of  cartoons depicting Muhammad in Denmark. Visitors to the Freethought Alliance booth could spin a wheel to see which version of hell they would go to. “We’re trying to express that in this country, and all free speaking countries, we are allowed to say things about religion that might not be kind or informed, yet we have the right to say it,” leader Brandon Gerbig told CBC News.

4. A man wrote a mean letter to Wisconsin news anchor Jennifer Livingston attacking her for being fat. Kenneth W. Krause wrote, in part: “Surely you don’t consider yourself a suitable example for this community’s young people, girls in particular. Obesity is one of the worst choices a person can make.” Livingston’s response is an articulate argument against bullying. The video has gone viral.

5. Two female students were threatened by a man with a knife on Ryerson University’s campus on Friday. The women told police that the man said he’d “cut someone” and would cut them too. Police said it appeared the man was homeless and had wandered onto campus. I’ll bet they’re right

6. The University of Calgary says it will hire 50 assistant professors and 60 post-doctoral scholars. It will also open a teaching and learning centre. Student leaders say they are pleased.

7. Justin Trudeau made his big announcement yesterday. Aaron Wherry live-blogged the highlights, including the crowd clapping to Maroon 5?s “Moves like Jagger” as Justin exited.

8. In case you’re not yet sick of Gangnam Style, there’s another parody video to watch. This one features McMaster University students, Mauraders athletes, and one uncomfortable looking president, Patrick Deane. It also has a large number of male shower scenes for some reason.

9. At least 25 people died at a college in northeastern Nigeria on Tuesday. It may have been related to a campus election on Saturday that was contested along religious and ethnic lines.

10. Members of Algonquin College’s student association say they may file a human rights complaint against the City of Ottawa if it doesn’t remove the age cap on student bus passes. It’s discriminatory to require students to pay adult fares after the age of 19, they say. #FirstWorldProblem? I think so.