What students are talking about today (Sept. 14 edition) 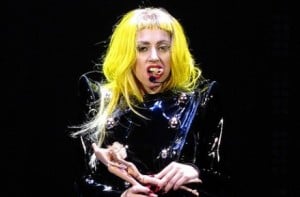 1. Lady Gaga’s latest bit of performance art/marketing is called “Sleeping with Gaga.” Last night, she climbed into a structure at New York’s Guggenheim and encouraged celebrities like Paris Hilton and Marc Jacobs to touch her while she slept. Oh, and she also got a new tattoo that some say looks like Honey Boo Boo, the proud redneck beauty queen who stars in the eponymous TLC show. (Not making this up.)

2. Sweden isn’t the fairytale land we Canadians sometimes imagine it to be. A drunk man, 38, fell onto the tracks at a metro station south of Stockholm and instead of being helped up to safety, he was robbed of his wallet, gold chain and mobile phone. The thief calmly fled. The victim was then hit by the train and seriously injured.

3. Ottawa isn’t safe either, apparently. An 18-year-old male was charged after two “swarmings” near the University of Ottawa. Hanten Hersi and an unidentified accomplice are accused of stealing from three people in two separate incidents. At one point, they showed a gun to a woman before robbing her. The second suspect is described as a 5’7″ to 5’10” tall black male with dreadlocks.

4. Alexander Peepre, a 21-year-old student at the University of British Columbia, will serve 60 days in jail for assaulting a Good Samaritan who tried to stop the looting during last June’s Stanley Cup riot. His prison term will be served on weekends, allowing him to finish his political science degree. He will also pay $2,000 in restitution to the owner of a truck he helped destroy.

5. Coursera offers free open-access university courses from top schools to anyone with an Internet connection. (These are also known as Massive Open Online Courses.) The University of Toronto’s computer science department’s first Coursera offerings are provinv vey popular. More than 85,000 students enrolled across three courses, including 48,000 in a single programming course.

6. University of Regina students are now able to creep each other in a whole new way! A site called URconnecting.com matches random U of R students with other random students who have signed up. They can then text message at will. It was created by a computer science student, naturally.

7. Edmonton has unveiled its first “bike box” on an intersection near the University of Alberta. It’s basically a green square where cyclists can stop in front of cars at red lights so that they can go first when lights turn green. The idea is to make bikes more visible, thereby improving safety.

8. Unemployedprofessors.com is exactly what it sounds like—a website where you can ostensibly hire poor profs to “make your papers go away.” I don’t recommend trying it… or do I?

9. Ontario is streamlining its student loans. The new “OSAP Express” will allow students to sign a single loan document all the way through post-secondary, reducing annual lineups. It’s about time.

10. Speaking of lineups, a reporter at Calgary’s Gauntlet student newspaper investigated why people are willing to queue for Tim Hortons. One man said he finds it comforting that the food always tastes the same. “I hate trying new things,” he said. That reminds me, I really need a coffee.