What students are talking about today (Sept. 26)

A gay-only school, a pet pig & Ultimate Fighting at Ryerson 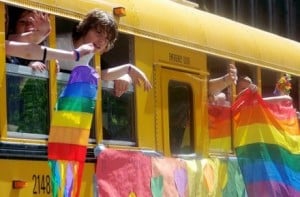 1. The Toronto District School Board is considering a high school for GLBTQ teachers and students, a proposal brought forward by a gay University of Toronto student. It seems unlikely, however. Michael Erickson, a teacher and expert in homophobia in Toronto schools, says that he would rather ensure that every TDSB school has queer-focused resources.

2. A University of Toronto student is having trouble finding an apartment because she has a (very cute) pet pig. She’s toured 15 apartments and didn’t like the only one that was willing to accept the pig. Welcome to the real world.

3. The Red River College Students’ Association has suspended its president, Garrett Meisner, after he was charged with assaulting a police officer at a recent Occupy demonstration. It looks bad on RRC, but at least he didn’t hold up a bank.

4. Doctors may be able to treat acne using a harmless virus that lives on our skin and kills bacteria.

6. Justin Trudeau, the 40-year-old Montreal MP and son of former Prime Minister Pierre Elliot Trudeau, will run for the Liberal Party of Canada’s leadership, which will be decided on April 14. Interim leader Bob Rae will not to run for the party that was decimated in last year’s federal election.

7. Ryerson University students are asking why they didn’t hear more about the Ultimate Fighting Championship’s (UFC) weigh-ins on campus at the Mattamy Athletic Centre on Friday.

8. Pat Joyce, Chair of the Canadian Alliance of Student Associations, was in Prince Edward Island Friday where he talked policy priorities. For one, he says CASA thinks students shouldn’t be denied Canada Student Loans if they have a vehicle valued at more than $5,000.

9. A study from RateSupermarket.ca predicts that high house prices mean recent university graduates would need to spend 12 years just to save a down-payment of five per cent. For a 10 per cent down-payment, graduates would need to save for 21 years. What’s worse, as The Globe and Mail points out, the study is based on optimistic assumptions like annual interest of 3 per cent paid on savings and annual raises of 3 per cent. In other words, good luck ever owning a home.

10. A Hong Kong billionaire says he will pay a $64-million reward to the man who marries his 33-year-old daughter Gigi Chao, a University of Manchester graduate. There is a problem, however. Chao, a lesbian, recently married her long-time female partner in France.