What students are talking about today (Sept. 27 edition) 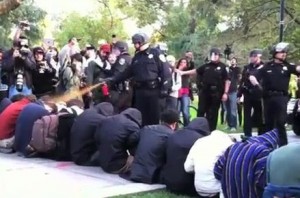 1. Honouring the American tradition of free speech and big lawsuits, the University of California Davis has set aside $980,000 to settle with 21 students and alumni who were pepper-sprayed by campus police during an otherwise peaceful Occupy protest last November. Students will get $30,000 each; the plaintiffs’ attorneys will get $250,000.

2. An online reality show called Beer4Breakfast is looking for Canada’s best party city by visiting a number of campuses in southwestern Ontario, reports the Western Gazette. The show’s producers say they will supply a party host with a bartender, DJ and professional photographer and then grade it based on party tricks, popularity, originality, team morale and shock factor. What could possibly go wrong?

3. Skiers near Flagstaff, Arizona will soon be gliding atop fake snow made from 100 per cent sewage effluent. “It’s a disaster, culturally and environmentally,” Taylor McKinnon of the Center for Biological Diversity told the New York Times, adding that he worries about the impact on the alpine tundra and to humans should skiers fall into the treated sewer-water snow and ingest it.

4. J.K. Rowling sold two million copies of The Casual Vacancy before it was released today, reports CBC News. The book is already getting tepid reviews in England and is surprising many with its salty language. The Harry Potter books have sold 450 million copies in 73 languages. Try topping that.

6. Now for some bad news from Ontario. There have been reports from multiple schools of delayed student loans. At Ryerson, the university has apologized. Students are frustrated considering it’s almost time to pay October rent, buy October transit passes and pay September credit card bills.

7. The University of Manitoba is informing (warning?) the public that students will be traveling in their beds on the Trans Canada Highway from Winnipeg to Brandon this weekend as part of the Faculty of Agriculture Students’ Organization’s 31st annual Aggie Bedpush fundraiser. Whee!

8. I’ll admit it. I’m mentioning this in hopes of increasing website traffic. Ryan Gosling’s name is so valuable that people are attaching it to their own causes, whether its’ teaching feminism or pretending to be Republican vice-presidential nominee Paul Ryan. The liberal behind @PaulRyanGosling tweeted this recently: “Hey girl, I don’t believe in global warming. But I do believe in snuggles.”

9. The University of Windsor Student Alliance released its final pricetag for Welcome Week events, which included hiring a rather expensive DJ, Avicii. The festivities cost “about $40,000.” Ouch.

10. Yesterday we found out that Justin Trudeau will run for leadership of the federal Liberals. Maclean’s has been on this story for a decade. To quote Paul Wells: “In 2002 Jonathan Gatehouse got Justin drunk in an Old Montreal bar… Soon enough the 30-year-old let slip a line about his political plans:  ‘I haven’t done anything. I haven’t accomplished anything. I’m a moderately engaging, reasonably intelligent 30-year-old, who’s had an interesting life—like someone who was raised by wolves, or the person that cultivated an extremely large pumpkin.'” Good luck, Justin.