What students are talking about today (Sept. 4 edition) 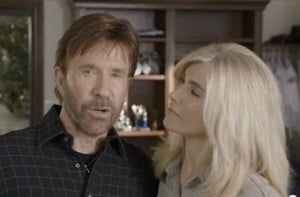 1. Chuck Norris, known for on-screen martial arts and a certain intractable meme, has a message for Americans. If you love your family and freedom as much as he and his wife Gena do, don’t vote for Obama. America is headed toward “socialism or something much worse,” says Chuck. Gina predicts “a thousand years of darkness.”

2. A Quebec election, which was at least partly called to settle the nightly student protests against tuition, is happening today. Polls put Liberal Premier Jean Charest in third place, but this is Quebec so anything could happen. Charest does look especially desperate. He warned over the weekend that a Parti Quebecois government could jeopardize the chances of NHL hockey returning to Quebec City. Read full coverage here.

3. First-year students are moving into campus residences and settling in for some awesome music. University of Guelph students will be treated to Zeus, Rich Aucoin and Young Empires tonight. To see which campuses are hosting Arkells, Yukon Blonde, Das Racist and more, click here.

4. A student at Miami University in Ohio (that’s vice-presidential candidate Paul Ryan’s alma mater) told a police officer to pull over his cruiser so he could slap him with a certain appendage. This came after the student was caught urinating in an alleyway and unsuccessfully tried to flee.

5. Stanford University researchers have examined four decades of research comparing organic and conventional foods. To their surprise, fruits and vegetables labeled organic were no more nutritious than their conventional counterparts and no less likely to have dangerous bacteria.

6. McDonald’s is opening two vegetarian restaurants in India. Many Indians don’t eat beef. Its current offerings in the country include the McVeggie, potato-based McAloo Tiki and chicken.

7. The list of finalists for the Scotiabank Giller book prize is varied, to say the least.

8. Three students suspected of taking part in the 2011 Stanley Cup riots in Vancouver have fled to the U.S. and face possible extradition. Peter Jensen White and Dakota Schlag are Americans who studied at the University of B.C. Nigel Li is a Canadian who is believed to be studying in Illinois.

9. The union that represents civil servants in Canada hired a plane to fly over the capital region for three hours on Saturday with a banner that read “StephenHarperNousDéteste.ca” (Stephen Harper hates us). The pilot says he was ordered down by the RCMP. Free speech advocates are upset.

10. The Democratic National Committee’s convention is now underway in North Carolina. Maclean’s columnist Emma Teitel is there, seeking out the crazies, apparently.