What you should (and shouldn't) bring to residence

Moving to university or college? Here's a shopping list. 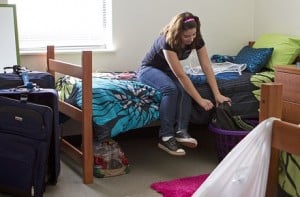 Welcome to First Year Survivor. Each week, a graduate will give you tips to make it through what may be the toughest year of school.

The morning before I moved into residence, I put everything I owned into garbage bags and tossed them in the car. I forgot a few things. My sisters, on the other hand, made multiple trips to Wal-Mart and Ikea to curate their dorm accouterments and it stressed them right out. I think the best approach is somewhere in between: plan, but relax.

Now that I know better, here’s what I’d bring:

Flip-flops for the shower. If you’re sharing a shower with multiple strangers, this is a must. For health reasons.
An extension cord. Many old residences didn’t anticipate multiple electronic devices.
Pillows, cushions, sheets, a comforter and towels. This isn’t a hotel. These aren’t provided.
Fan or mini A/C unit. Many older residences won’t be air conditioned.
Kitchen stuff. You’ll want a frying pan, cutlery, a pot, plastic containers, dishes and utensils.
Laundry detergent. This stuff is really expensive on campus, so bring it.
Bin or bag for transporting laundry.
Drying rack. Save money (and electricity) by drying your clothes on a rack.
Sticky stuff for posters. Tacs and nails won’t be allowed; sticky stuff might be.
A notebook computer. Even if you’re a desktop fan, you’ll need this for group projects.
An electric kettle, tea or coffee: If you aren’t already addicted to caffeine, you will be soon.
Bicycle and bike lock. Especially if you’re on a big campus.

Here are a few things I would avoid packing:

Bar fridge. Will you really have time to go shopping for yogurt? No. Besides, it’s a hassle to move.
Posters. You’ll probably find way cooler ones at the annual poster sale in September.
Extra mattresses. You won’t be let through the front door with these. Two words: bed bugs.
An agenda. You’ll probably be given a really good one for free by your student union.
Extra furniture. There probably isn’t room and it probably won’t be allowed.
Printer. If you’re like me, you’ll find it cheaper and more convenient to use campus printers.
Candles. You could be in big trouble if caught with these.
Pets. Hopefully you don’t need to be told not to bring your dog. You did get into university, right?