Whatever happened to tenure?

The backbone of today’s university is the ill-paid, overworked lecturer 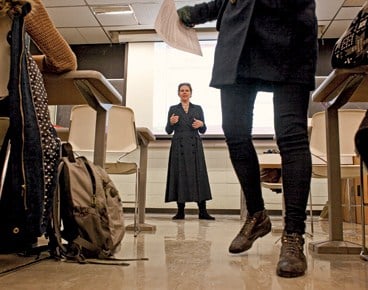 In 2000, 36-year-old Leslie Jermyn went to teach her first course as a sessional lecturer at the University of Toronto. For $4,550, she taught 100 students a two-month first-year anthropology course. Though Jermyn would go on to teach courses every summer for the next 11 years, the job was never guaranteed, and every year she experienced “gut-wrenching tension” waiting to find out whether she’d won a new contract. “Often I was hired within two weeks of the start time of the course,” she says. For years she had no benefits and worked out of a shared office, furnished with one desk and one telephone. In 2007, after she had been teaching upwards of 800 students a year for three years straight, she argued to the dean that the department needed a regular teaching position. That didn’t work, and Jermyn says she knows why: “I’m cheaper without benefits.”

Jermyn’s lot is similar to that of many North American university undergraduate teachers today. A November 2010 report titled “Employees in Postsecondary Institutions” released by the U.S. Department of Education concludes that the proportion of university instructors who have tenure or are on the tenure track fell below 30 per cent in 2009—a big drop from 1971, when 57 per cent were on the tenure track or had tenure already.

In Canada, the numbers tell a similar story. A 2010 Statistics Canada survey of full-time teaching staff in universities shows that there were 20,685 tenured professors in 2009, down from 26,487 in 1999. Meanwhile, over the same period the number of sessional staff rose from 2,865 to 3,135. Estimates from the Canadian Association of University Teachers (CAUT), a 65,000-strong academic staff union, say that between 40 and 60 per cent of undergraduate teaching is done by sessional lecturers who often cobble together a living earning between $5,000 and $7,000 for a four-month course, sometimes travelling between two or three universities in one term. The joke in academic circles is they’re “roads scholars.”

But for undergraduate students, who paid 15 per cent more in tuition last year than in 2006, and whose debt has risen 20 per cent over the past decade, it’s no laughing matter. Many in the nation’s academic community say the cheap labour is shortchanging students who are being taught by overworked, underpaid lecturers, who, though often excellent teachers, aren’t the cutting-edge researchers universities would have you believe are instructing kids.

“When you’re substituting full-time professors with teachers with longer hours, and higher workloads, it basically undermines the whole profession,” says James Turk, executive director of CAUT. “They earn half to a third of what a regular faculty member will earn, and have to teach ridiculous amounts to earn a modest living. They’re not paid nor expected to do research, [which] limits their ability to have a career as an academic.”

Take Teressa Fedorak, 39, who, since 2003, has worked as a lecturer at Thompson Rivers University in Kamloops, B.C. She teaches 80 to 100 students a semester and estimates she spends 60 hours a week teaching. The rest she spends at her other two jobs: as an elementary school teacher and gym trainer. She says it’s the only way she can earn enough to pay her mortgage and keep her academic career on track. “I’m trying to achieve the tenure track position—you can’t let it slip,” says Fedorak. But, she says, it may be a fruitless quest. “You’re working, working, working just to pay your bills,” she says. “You have no access to professional development or the time to do that.” And she says the university “likes to hold us in this pattern because it’s such a money-making device.”

For tenured profs, it’s equally frustrating. Thanks to a drop in government funding and a rise in corporate partnerships, says James Compton, an associate professor at the University of Western Ontario and president of the faculty association, “there’s increasing pressure on tenured faculty to look for those sources of money, and to do more research to get that money.” Along with the pressure to hunt down lucrative research grants, profs are burdened with a disproportionate amount of administrative work, because sessional lecturers exclusively teach.

The idea of tenure is a relatively recent one. Fifty years ago, says Michiel Horn, professor emeritus at York University and author of Academic Freedom in Canada: A History, CAUT became concerned about codifying secure tenure and the separate but related issue of academic freedom. “Professors started to insist that there be documents outlining terms of their appointment, and terms at which they could be dismissed,” says Horn. Universities acquiesced because it made them more attractive to job-hunting academics, then in short supply. “It was important for institutions to show that if you took a job at fill-in-the-blank you weren’t in danger of being sacked because the departmental chairman didn’t like your suit,” says Horn.

Over the next 40 years, tenure positions filled, hiring dramatically decreased, and soon there were more graduates than available positions. These days, when a tenured prof retires, the position is often replaced by a lecturer spot. “Things have never returned to that golden age,” says Horn. “You can see steadily from the 1970s a growing proportion of students being taught by people who do not have conventional tenured positions.”

Because most faculty unions were founded in the ’70s, when the majority of members had tenure, lecturers’ interests were never prioritized in negotiations, says Ian Robinson, author of a 2008 study on tenure published in the Labor Studies Journal. “Instead, [the unions] focused on their tenure-track membership,” says Robinson, “and that meant that the pay between the two groups widened and they didn’t try to resist hiring of non-tenure-track faculty.” Robinson says sessional lecturers create a real conundrum. “Either these are inferior teachers or they’re equally good teachers,” he says. “But if they’re equally good teachers, what the hell are you doing paying them less?”

One department head who preferred to remain anonymous recalls his time at the University of Guelph. “We used to hire sessional instructors, and I could pay them whatever I wanted—and what they got was peanuts,” he says. “It was really weird. The dean’s eyes would look a little askance when you paid them over $5,000.” (Sessional lecturers now have a union and a collective agreement at Guelph.)

Many administrators aren’t thrilled with the status quo either. “Most deans are concerned that they have to rely so heavily on sessional lecturers,” says Richard Sigurdson, arts dean at the University of Manitoba. Sigurdson says that aside from lecturers not having enough time or resources, there are problems with teaching consistency, and with students building relationships with such transient instructors. But, he says, administrators’ hands are tied, especially after the recession. Money is the bottom line.

If there’s a remedy, Robinson says it will come from union pressure. Eight years ago, CAUT began to organize lecturers into unions. “The pay levels are gradually going up, and in some places the job has some security,” says Turk. Currently, the CAUT is angling for a pro rata model, which would see the sessional lecturer paid on par with professors.

Another option—perhaps a more realistic one—is a teaching-only faculty stream, employed by many universities in the U.S. and some in Canada, including the University of Ottawa. The position is oriented toward instruction, but would guarantee greater job security, and better compensation.

But not everyone is sold. “These are the sort of unholy deals being struck in order to provide some greater security,” says Mark Langer, film professor at the University of Ottawa and president of the Ontario Confederation of University Faculty Associations. Research, says Langer, is part and parcel of a great university teacher. “I don’t think any university or any faculty association has completely accepted the idea that there would be ‘just teaching’ faculty,” he says. Langer fears that if Canadian universities cannot create more favourable working conditions for faculty, they’ll lose out on talent. “I have a colleague at Carleton who finally accepted a full-time job in another country because, despite her considerable commitment to the university, the university had no commitment to her.” And she’s not unique, he says. “A lot of these people are leaving for other jurisdictions. We’re losing the best and the brightest because we can’t offer them a career.”

For now, universities are unlikely to give up the cheap labour, and the best that lecturers can hope for is an outcome like Jermyn’s. She’s been awarded a senior lecturer position at U of T. She’s guaranteed half a year’s worth of courses—which amounts to $30,680. She gets some benefits, though still significantly less than professors, and she’s been promised a private office. Now president of a local sessional teachers’ union, CUPE 3902, she knows she’s a rarity in a field where the vast majority are lower-ranked and part-time. That’s a reality she says universities should be transparent about. “I think they shouldn’t try and hide it, it shouldn’t be an embarrassing secret.” Says Jermyn: “We shouldn’t be the skeleton in the closet.”