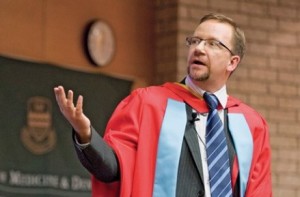 Every university has them—prize-winning researchers, or profs who routinely get their faces on the late-night news. “Celebrity academics” are typically figures for a school to extol, but the reigning newsmaker at the University of Alberta won’t be gracing this year’s alumni brochures. Formerly the dean of U of A’s medical school, Philip Baker is now best known as the guy who plagiarized tracts of an address to graduates from an article he’d read in The New Yorker magazine. Baker lost his administrative position following an internal investigation. But he kept his job as a professor, and was expected back on campus in October.

Undergrads who followed the case might rightly wonder what gives. For the past decade, they’ve been lectured incessantly on the evils of scholastic fraud, as the explosion of online information raised fears of a “cut-and-paste” generation that would eschew the convention of intellectual originality. Studies appeared to bear out the concerns. Fully 53 per cent of 15,000 undergraduates who participated in a Canada-wide survey published in 2007 in the Canadian Journal of Higher Education admitted they’d cheated on written work at least once in the preceding 12 months. Two-thirds of those cases involved copying sentences without citation.

Yet the same survey suggests the higher ranks of academe are far from pristine. Fully 35 per cent of 1,318 graduate students surveyed admitted to cheating on written work—some of whom likely hold tenure-track positions today. Meanwhile, a growing number of academic fraud cases involving fully tenured professors have been making the news. In February, the journal Current Problems in Surgery retracted a paper co-written by René Lafrenière, the head of surgery at the University of Calgary’s medical school, because tracts appeared to have been lifted from other sources without attribution (the title of the article: “Ethical Issues in Surgical Treatment and Research”).

Five months later, evidence of plagiarism forced the statistical journal Computational Statistics and Data Analysis to retract a U.S. government-funded report that became a talking point for climate-change skeptics around the world (Edward Wegman, the George Mason University professor who led the study, later blamed the copied material on an assistant).

Columbia University, New York University, Texas State University and the California State Polytechnic Institute in Pomona have all been sullied in recent years by similar cases. Yet there is scant sign of a crackdown on the order of the one now aimed at undergrads. While some of the impugned professors lost their jobs, others, including Calgary’s Lafrenière, remain in their positions. The reaction pales in comparison to the failing grades, reprimands and expulsions universities have handed undergrads in recent years for using online essay services or cribbing from Wikipedia. The University of Toronto, among others, now encourages professors to use Turnitin.com, an Internet service capable of ferreting out borrowed phrasing.

That’s not to say we’re facing a rash of fraudulent professors, says Julia Christensen Hughes, an organizational behaviour expert at the University of Guelph who co-authored the 2007 report on student integrity. But it’s time for someone to quantify the problem, she says. “There are pressures, and it would be interesting to see to what extent those pressures are the same on faculty as they are on students,” says Hughes, now the dean of Guelph’s College of Management and Economics. As it stands, most of the newly created “academic integrity” offices in schools across the continent monitor only student transgressions. When scandals involving faculty members flare up, many institutions take the U of A route, lowering a blanket of silence in hopes of smothering the controversy.

Irving Hexham, a University of Calgary professor who has written on academic plagiarism, chalks this up to the self-preservation instinct. “It’s a desire to protect the reputation of the institution, to protect their government-funded research grants,” he says. The result is a double standard corrosive to both the university and society, adds Hexham. “It sends a message to students that, if you’re bold enough, you can get away with it. People who plagiarize can use their wrongdoing to get into positions of power. I believe that academic frauds surround themselves with people who aren’t very competent, because competent people would expose them.”

Hexham goes so far as to suggest criminalizing serious academic fraud—university experts, he points out, are often called upon to advise government or industry on life-and-death matters. Offences like Baker’s, on the other hand, are harder to judge, as by all indications the former U of A dean merely wished to sound clever in front of an audience. Maybe he lacked the time to summon original material. Or maybe he lacked the wit. But one thing’s certain: neither excuse would buy much mercy for a copycatting student.

Want to know what students accused of plagiarism endure? Read Emma Teitel’s I was a plagiarist.