Where did the prof go?

The debate over whether to put more lectures online 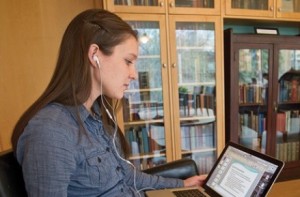 When Allison Torbiak sat down in her first-year psychology class at the University of Manitoba two Septembers ago, she was surprised to hear the woman at the front of the room announce that their Monday and Friday lectures would be replaced by online recordings of two professors talking over lecture slides. The class would meet only once per week, on Wednesdays, for a seminar led by this woman, a graduate student—and not a professor. While many of her almost 200 classmates seemed excited, Torbiak says she was disappointed. “I was looking forward to the big auditorium with lots of kids.” She wondered, “How will I stay motivated without a real live professor?”

Professor Jason Leboe-McGowan is one of the two professors who created the “blended” psychology class three years ago (blended is what academics call courses that are partly online and partly face to face). He says he had little choice but to put lectures online. All but two of the professors who had previously taught 2,500 intro psych students had retired or moved to part-time. “So the question became,” he says, “how can we offer intro psych to 2,500 students without the teaching resources to do it?” The answer was recordings and teaching assistants. Like Torbiak, he was worrried about engagement.

As more universities face budget issues, more are turning to blended formats, especially for introductory courses. A 2011 report by a group of university administrators called Canada’s Collaboration for Online Higher Education and Research (COHERE) found that blended courses have been tested in nearly every corner of the country. No university has implemented them widely, but that’s about to change. In 2011-12, York University introduced 11 new blended courses. It is planning for 75, ranging from first-year to master’s-level, in 2013-14.

Queen’s University is adding sociology, gender studies, calculus and classics this fall to its roster of blended offerings, which up to now included just first-year psychology and geography. In introductory psychology, the three hours of weekly lectures are gone. Instead, there is basic content online, a one-hour in-person lecture in which the professor poses a question or discusses an aspect of research, and an hour-long “learning lab” in which teaching assistants (some of them specially trained undergraduates) guide small groups through hands-on activities. Instead of six professors, there are now four.

Queen’s English professor Mark Jones says he worries that fewer hours of in-class lectures will mean not only less learning, but also fewer faculty jobs. While he doesn’t doubt some online courses can be helpful, “the way in which blended learning is being implemented,” he says, “is slanted more toward cost savings than to improvement of learning.”

Associate dean Brenda Ravenscroft suggests he need not worry. “There is a fear that we might be doing something like this to save money,” she says, “and it’s part of my role to explain that that theory is unfounded.” She points out that Queen’s is spending a substantial amount of new money on redesigning the blended courses and, in some cases, hiring additional TAs. She says enhancing student engagement in large classes by providing small-group learning opportunities is the main goal. “I can’t see the savings,” she adds, “except for perhaps the big picture of not needing more big buildings.”

The University of Central Florida (UCF) saved an estimated $7 million in construction costs in the decade after it started offering blended courses in 1997, a period of substantial growth in student enrolment. By 2010, more than half of students were taking at least one blended course.

UCF also reported that students in blended courses are just as likely to get C-grades or better as those in traditional lectures.

Leboe-McGowan has observed much the same at the University of Manitoba. There was a control group the first year blended courses were offered: two sections taught in-person with the same assignments, textbook and exams. The final grade average in the blended stream was within two per cent of the traditional sections. Course evaluations were “average to good.” It was enough for him to shelve his initial fears. “I can’t be in 10 sections of intro psych at once,” he says, “so this hasn’t been a bad compromise.”

As Torbiak finishes up her second year, she looks back on psychology fondly. She liked being able to watch lectures at midnight, while still getting an hour each week to interact. In fact, the young science major now wonders, why aren’t more of her classes blended?