Where Ontario's next university must be built

Sorry Niagara Falls, it's not you 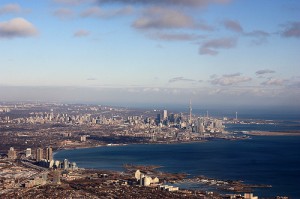 Aerial view of GTA by Paul's Best Shots on Flickr

No sooner did Ontario’s government reiterate in their throne speech that they will build three new universities than a couple of small-town politicians stepped up to demand one for their town.

Niagara Falls MPP Kim Craitor told the Niagara Falls Review yesterday that the city of 82,000 should get a campus. Naturally, the mayor is on board too. The newspaper called it “a no-brainer.”

But sorry Niagara Falls, your case is weak.

The new book Academic Reform, by policy experts Ian D. Clark, David Trick and Richard Van Loon, took a comprehensive look at exactly what Ontario’s post-secondary system needs right now. They examined what works and what doesn’t, from Australia to Europe, from Florida to British Columbia.

But only in the suburban ring around Toronto, known colloquially as The 905.

And the rest of Ontario already has more seats available than the GTA, despite the fact that the GTA will soon have more than half of the 18 to 24-year-olds. There are 20 universities in Ontario, but only three main campuses are in the GTA. That partly explains why nearly half of local secondary school students leave the city to go to school—far more than come into the city to be educated. Thirty per cent don’t get into university at all. Could it be because local schools are full?

It’s also clear from the research that the GTA needs entirely new campuses, not expansions. Toronto’s universities are already among the biggest in the world. York University, at 55,000 students, and the University of Toronto, at 54,000, are the fifth and sixth largest in North America. U of T has determined that it doesn’t want more growth. York and Ryerson can only grow so quickly.

That said, there are a couple fast-growing cities just outside the GTA that could make reasonable cases too. Barrie, which has put aside $14-million for a potential campus, grew 33 per cent in the past decade to 191,000. Milton, which grew by 71 per cent between 2001 and 2006 to 88,000, has land set aside for a possible campus of Wilfrid Laurier—and it’s a short commute to Brampton.

But Niagara Falls, with 82,000 people, grew by just four between 2001 and 2006. Besides, it’s only 17 kilometres from Brock University in St. Catharines—also a short commute.

If they think they’re getting a new university, they’re dreaming. All three should go to the GTA.