Who makes too much money at St. Francis Xavier? 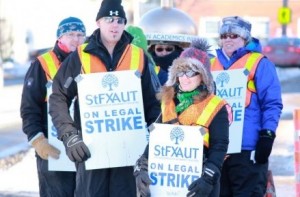 As Canadian universities continue to pay the most generous compensation to their professors in the world, something is going to have to give. Mix this with pensions that are sometimes worth more than the paycheque of professors in the U.S. and U.K. and it’s a recipe for budgetary disaster.

St. Francis Xavier University is the most recent university staff to go on strike, cancelling classes for more than 4,000 students. Pay and the contracting of term professors are some of the justifications offered by the Association of Nova Scotia University Teachers (ANSUT).

As the Ontario Undergraduate Student Alliance reported in a 2011 study, new funds for teaching staff there are mostly going to current professors, so it’s not as if students are benefiting.

There is also blame to go around in terms of big raises for administration. According to ANSUT, administrator salaries at St. FX have risen from 2004 to 2011 by 77 per cent. That’s an increase six times greater than the rate of inflation, an unsustainable number for taxpayers and students to shoulder.

There is an apparent tug-of-war between faculty and administration at universities like St. Francis Xavier to see who gets the bigger raises. Students will pay the price regardless of who wins.

Out of control compensation including salaries, benefits, and pensions needs to be brought under control to balance the books. With reduced government funding for universities, the options are cutting costs and services, increasing tuition or going further into debt.

A major cause of financial pressures is the defined benefit pensions provided by most universities in Canada. The plans offer a guaranteed income for life based on a final average salary. The higher salaries go, the higher pensions will be. For example, some university presidents will receive an annual lifetime pension of $300,000 or more.

From 2009 to 2011 Canadian universities saw employee pension shortfalls rise from $680-million to $3.2-billion. Either these plans are reformed and converted to less costly defined contribution plans or budgets will be ravaged by the consequences including increased debt.

More debt was the option Dalhousie University chose for their pension. Faced with a 2010 shortfall, cuts weren’t palatable to pay for the topping up an under-performing retirement fund, nor was trimming the payout. Accounting rules were thus changed to allow the university to keep less money on hand to cover liabilities, which required arguing the university wouldn’t ever go bankrupt.

But problems at the Nova Scotia College of Art and Design (NSCAD) are proof debt can practically crush an institution. Shuddering under $20 million in loans, the school is under intense government pressure to fix their finances. NSCAD is renegotiating union contracts and increasing student fees.

Running a deficit solves nothing. The answer is limiting costs and balancing budgets. If Canadian universities continue to increase compensation on all sides, be it through salaries or golden pension plans, all that will happen is increased student fees and long term liabilities.

It is hypocritical for universities to say they are in it for the students when their spending habits will either harm them directly through service cuts and fee hikes, or harm them later when they are taxpayers forking out bailouts.

The solution is in fixing total compensation. Wages need to be frozen all around, benefits need to be redefined and pensions need to be reformed so they are sustainable and realistic. Anything short of that will come back to bite students sooner or later.

Adam Faber, a graduate of Nova Scotia Community College, studies math and French at Saint Mary’s University.  Bill Tufts of Fair Pensions for All contributed files to this commentary.