Why I dropped out of English 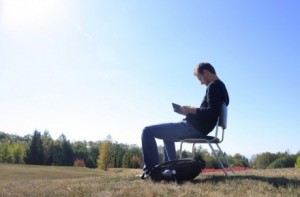 There’s a point in most fizzling relationships when the magic is gone and everyone is just going through the motions. My relationship with the University of the Fraser Valley’s English department reached that point in a Fall 2011 class when, like a threadbare superhero plot, everything just became too easy.

It wasn’t the prof. He was great. It wasn’t the material. I loved that too. I think it was the fact that I scored an A- in the course and knew I didn’t deserve it. Or that we all were scoring grades we didn’t deserve and that the department was convincing us that we earned them.

I remember my friends and I swapping stories about late nights, unfinished readings, rambling and incoherent essays. We attributed our successes to what we called the ‘bullshit’ factor. Our pride protected us from the truth: that we were victims of a system that was exploiting us for tuition.

I should not be able to get an A in an English class without having read most of the texts. If I can, I’m probably some sort of literary prodigy. But my friends also got good marks without having read much. Are they prodigies? What about the girl who sat in back, never talked, and skipped roughly half the semester last year? How did she even pass?

The other explanation is that our professors see our offerings as bullshit and yet still give us As and Bs and then shunt us through the program. We want to believe we are uniquely gifted but in fact we’re just part of a system that encourages mediocrity. They sit us down like monkeys at typewriters, accept our pages of nonsense for four years and then hand us our certificate at the end. The problem is that the certificate was never the goal to begin with, since it’s the monkey who must apply the learning, get the job, and live the life.

Admittedly, I loved many of my classes. I became a better writer, and I am proud of the short stories and plays I wrote under encouragement from my professors. I loved reading texts, debating them, interpreting them, and writing on them.

Yet I struggle to understand the pedagogy. We would read texts that were sometimes centuries old and were expected to interpret them with only a smattering of historical context. We would ignore the entire history of scholarship on a text and were applauded for it. Dozens of liberal arts apologists speak of the importance of critical thinking development but in post-modern discipline that does not believe in authoritative answers and can barely even agree upon rules, how is critical thinking encouraged? One student may write an interpretation of Shakespeare through an historical Catholic lens; another may reinterpret The Tempest as a communist allegory, anachronisms be hanged, and both will receive the same mark becuase both are assumed to have ‘critically thought.’

A few semesters ago some friends and I took an upper-level English class together. We each attended the class, participated to a greater or lesser extent, and wrote a large final essay. After that we discovered, except for one person we asked, we received the same mark on the final essay: 93 per cent. The individual who did not receive 93 had written his in about four hours. And he got a B. I strongly doubt we all deserved 93 but I don’t even know even now how we were graded. I would hope my mark would reflect my comprehension of the course material but postmodern theory has rendered such judgments subjective and difficult. Was my grade indicative of my writing? My formatting? My use of adverbs? It felt like a sham. It destroyed my sense of accomplishment.

I could have stayed in the program, skipped readings, written rambling essays and honestly still have somewhat enjoyed myself. Yet when I realized that much of the acclamation, the ease, and the grades are the product of a system that encourages mediocrity, it seemed wasteful to stick around.

Paul Esau is completing a fifth year in the Bachelor of Arts program. He now majors in History.